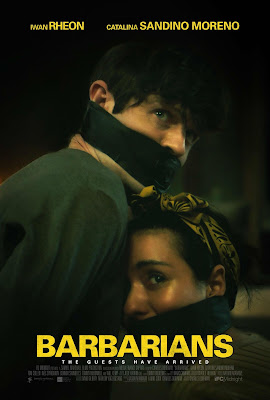 Barbarians plays with audience expectations established by countless home invasion narratives of recent past. There are several different approaches to the horror sub-genre, and tropes that have developed from their repeated use. The filmmakers of Barbarians seem to realize this and utilize tropes from two different approaches in order to keep the audience guessing. The use of MacGuffins helps disguise the true motivation of the invaders but may also leave some audience members disappointed that the threat alluded to is nothing more than a distraction.

Barbarians begins with social media posts and background information about the property which is the setting of the invasion later in the film. Through the posts made by social media influencer Lucas (Tom Cullen), we learn about the property containing an artifact known as the Gaeta Stone, and his intentions to turn the land around it into a housing community. Lucas owns the land after a controversial court case with the original owners and has agreed to sell the existing house to his filmmaker friend Adam (Iwan Rheon) and Adam’s artist girlfriend, Eva (Catalina Sandino Moreno). Even though Adam and Lucas claim to be friends, there is an unhealthy and combative dynamic between them, which escalates over the course of the evening. This proves to be one of the many misdirections.

Lucas drives to visit the remote country home on Adam’s birthday with his girlfriend Chloe (Inès Spiridonov), with plans to sign over the deed, until an unexpected home invasion interrupts their evening. Three masked intruders enter with weapons and terrorize the two couples, though they remain silent, keeping their motivations secret. This is another often used trope of home invasion films, with movies like The Strangers or Funny Games never revealing the motivations of the intruders. While Barbarians does eventually give reason for the acts of terror and violence, they are somewhat obvious and uninspired, aligning the film with themes found in many home invasion films that were released shortly after the housing bubble burst in 2008.

Because Barbarians throws so many ideas at the audience in an attempt to keep them guessing, it results in a narrative with many loose threads and underdeveloped plot points. This is the trade off for the surprise twist, which is still fairly predictable. As a result, the story in Barbarians feels scattered and lacks the focus necessary to make any of the ideas work. In other words, Barbarians tries to do too much and ends up feeling disappointing in its failure to follow through on a majority of the initial promises.