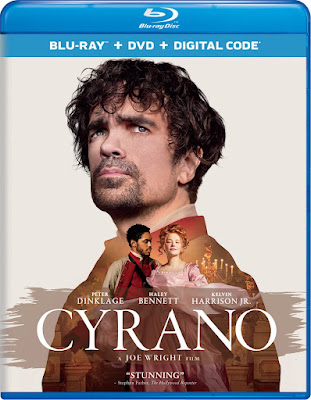 An element of film production that doesn’t often get discussed is unity, how all the individual elements work together. It is impossible to review Cyrano without considering the film’s unity. Each of the individual elements in Joe Wright’s adaptation of Erica Schmidt’s musical are fantastic. Wright’s direction is full of formalistic embellishments, Peter Dinklage gives an emotional performance as the title character, and there are several memorable songs. At the same time, these fantastic elements rarely work together, leaving a film that feels like a collection of individual elements.

Schmidt’s stage musical is based on Edmond Rostand’s classic French stage play, Cyrano de Bergerac, though it has original music created by members of rock band The National. The story follows a heartbreaking love triangle as well as an iconic representation of unrequited love. Cyrano de Bergerac (Dinklage) is a skilled soldier with a quick wit, but he keeps his affections for his longtime friend Roxanne (Haley Bennett) a secret, believing she could never love him due to his dwarfism. When Roxanne falls for Christian (Kelvin Harrison, Jr.), a soldier under Cyrano’s command, she turns to her friend for assistance. Despite his feelings, Cyrano orchestrates a relationship between Roxanne and Christian.

Because Christian isn’t skilled with words, Cyrano begins to write letters to Roxanne for him, using the power of his unrequited affections to say all the right things. This leads to a complicated love triangle, because Roxanne has little interest in Christian without Cyrano’s words. These words are often supplemented with song and dance. Despite changing aspects of Cyrano’s appearance and the stylistic presentation of the musical genre, Cyrano stays faithful to the source material.

The music created by Bryce Dessner, Aaron Dessner and Matt Berninger of The National has a few shining moments. "I Need More” is a female empowerment song that has power, which is quickly followed by the incredibly romantic "Overcome." These are two among several memorable and effectively emotional tracks, with a style that sound distinctly like The National. The only downside to this was the fact that I spent much of the film hearing The National’s lead singer, Matt Berninger, in place of the actors. As much as I love The National and am a fan of this classic French love story, I can’t say they went together incredibly well.

Even when his films are a failure, Joe Wright is still an interesting filmmaker. This was precisely how I felt about Cyrano. It often felt like a failed experiment, but I found myself moved, nevertheless. Part of this was the power of the story itself, part the effectiveness of the performances, and the melancholy nature of the music also played a role. I only wish all of these elements had worked better together.

The Blu-ray release of Cyrano comes with a DVD and digital copy of the film, along with the high definition presentation. The disc itself only has one featurette for a special feature. It is a making-of feature, with interviews and behind-the-scenes footage of the production but is also fairly surface.