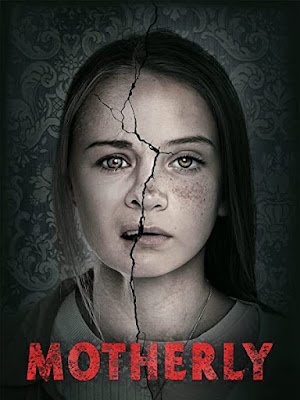 Home invasion narratives have been increasingly popular in the horror genre over the past two decades, especially with lower budget releases like Motherly. This is likely because of the affordability of a film with essentially a single location, and aside from a few flashback sequences, Motherly takes place entirely in an isolated farmhouse. While cost-effective, setting a film in one location places a lot of pressure on the screenplay and performances. Although far from the worst home invasion film (there are a lot of bad ones), Motherly has a script with a predictable twist and too much faith in the child acting central to the narrative.

We join Kate (Lora Burke) and her daughter Beth (Tessa Kozma) in their remote farmhouse home on Beth’s birthday. The young girl is frustrated with their isolation, which is revealed to be a result of them being in witness protection. Kate’s husband has been convicted of murdering Beth’s neighborhood friend in their former home, and Kate is writing a book about the events. Setting aside the improbability of a book being written by someone in witness protection, and the unexplained need for them to be hiding, Motherly is a frustrating viewing experience from the beginning. Human behavior is off, and the acting is not good enough for these hints to be subtle. The audience knows early on that there is something off about the story, but the audience must wait nearly the entire film for that obvious twist to be revealed.

The tension between mother and daughter increases, as Beth is frustrated that her father is not with them, and their only visitor is a law enforcement agent named Hal (Colin Paradine). This changes suddenly when two home invaders show up, revealing the need for witness protection. Initially disguised by large parkas, the invaders are eventually revealed to be couple Mary (Kristen MacCulloch) and Lewis (Nick Smyth), who have some questions for Kate about the murder her husband was convicted for.

Motherly is available on Demand and Digital.