Never Back Down: Revolt Blu-ray Review 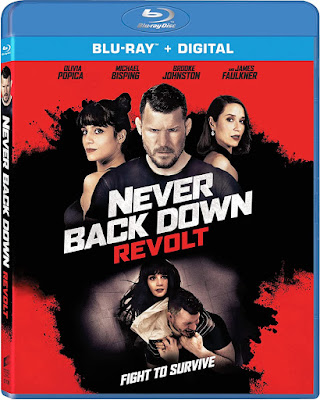 The Never Back Down franchise loosely connected its first two sequels by bringing back supporting characters from the original 2008 film, but Never Back Down: Revolt is a sequel in name only. Aside from the film involving an underground fight ring, there is no connection to the other installments in the franchise. Although the latest sequel feels as though it has been updated to consider the current cultural climate, having a female fight club at the center of the storyline is not enough to prevent the formula from feeling stale and predictable.

When struggling MMA fighter Aslan (Tommy Bastow) refuses to throw a fight for a crooked promoter, Julian (James Faulkner), he finds himself in debt. In order to pay off this debt, Aslan’s sister Anya (Olivia Popica) agrees to fight on his behalf. After a local fight fails to make a big enough impact on the debt, Anya takes a fight in Rome, where her brother cannot protect her. Upon arrival, Anya is imprisoned by another evil fight promoter named Janek (Michael Bisping), forced to compete against other women in a similar situation with a threat of prostitution if they don’t comply.

Even ignoring the fact that this is the same premise used for the 2013 film, Raze, Never Back Down: Revolt is disappointing. Despite a set-up that allows opportunity for multiple fights, there is more action in the sub-plot of Aslan seeking answers about Anya’s disappearance than in the actual fight ring. Although we are told a lot about the fights held for an elite audience, more time is spent with the fighters in their imprisoned state between matches. This leads to an inevitable revolt (as the title suggests), and some extremely staged fight moments serving as the climax.

I call them fight ‘moments’ because it rarely feels like continuous choreography. Instead, it feels like a collection of brief moments that contain one or two moves. There is rarely any indication of a continuous flow of action, even within some of the fights in the ring. While I applaud the attempt at a female-driven entry into the franchise, the execution fails to make the concept work. The screenplay seems more interested in the drama of the fighter’s victimhood than creating opportunities for action. The cast does their best to make the material believable, but mostly come off as stiff. And even though this may be because they were hired for fighting abilities rather than acting, the fight scenes don’t do much to display these abilities.

The Blu-ray release for Never Back Down: Revolt comes with a digital copy of the film. Honestly, this may be the recommended way of watching this film. Just use the digital code to watch the film on your phone at the gym, and maybe the inconsistencies in the filmmaking will be less apparent. There are no additional special features on the disc.