What has made the Fast and Furious franchise thrive over the years is the ensemble cast of characters and the star power of the actors that played them. You could argue that it is also the over-the-top feats accomplished in cars, but I think F9 is evidence that the cast matters more. Even with the unlikely return of some forgotten characters from the past, it is glaringly apparent that several of the characters both original and added are missing from this installment. Obviously Paul Walker’s passing has left the presence of Brian off-camera, what really feels missing is Hobbs (Dwayne Johnson) and Shaw (Jason Statham). The resulting film feels off-balance, like a recipe missing ingredients.

Much of what is missing from the film is the lightheartedness the franchise has embraced in recent installments. There are several flashback sequences giving us insight into the past of Dom Toretto (Vin Diesel), mostly to develop an explanation for the sudden existence of his estranged brother Jakob (John Cena), who appears as an elite assassin who steals a part of a device named Aries, which can hack into any computer weapons system. The team is put together to get the device back, and to stop Jakob for getting the remaining pieces for Cypher (Charlize Theron) in some Bond-level plot to destroy the world or something. None of it is very believable, especially when dead characters from the franchise are suddenly alive again.

As much as I feel he adds to the franchise, many people were upset by Shaw being embraced as a member of the team given his part in the death of Han (Sung Kang). If nothing else, F9 mixed that problem for the next (and final?) film in the franchise. It is revealed that Han isn’t actually dead when he exposes himself as having secretly been working with Mr. Nobody (Kurt Russell), in an effort to stop Cypher and Jakob. And for good measure Mia (Jordana Brewster) joins in the efforts, because Jakob is her brother and because it gives a reason for Brian not to be there, shown from an exterior shot to be watching the kids.

As usual, there are number of high-octane action sequences that test the audience’s suspension of belief. And yet, it feels as though the studio out minimal effort into this installment. The CGI effects used in the action scenes is the worst it has ever been in the series, and it doesn’t help that it feel like there is less practical work. Part of this is due to the stunts getting increasingly outlandish. Somehow a car in space is nowhere near believable, and even less enjoyable. Even when the action was less than realistic in the past, the good-natured cast made it enjoyable. Whether it is the cast members left around this time or the writing, but even the one-liners felt perfunctory and ineffective.

The 4K Ultra HD release of F9 comes with a number of different ways to watch the film, and two different versions to choose from. There are three copies, including a Blu-ray disc and digital copy, on top of the 4K disc. The discs also come with the option to choose from the theatrical cut of the film and the director’s cut, which is seven minutes longer. I honestly couldn’t tell you what was added and wouldn’t claim it makes a big difference to the end result, but die-hard fans may be excited to see a bit more.

They must have put all of the deleted scenes into this cut, because there are none contained in the special features included on the discs. The only additional footage included is a gag reel, which is at least moderately more funny than the script they wrote. A majority of the extras are featurettes and behind-the-scenes looks at stuntwork. A lot of this just comes off as self-congratulatory promotional material, but there is also a director’s commentary on both cuts of the film with Justin Lin. And as much as I complained about the quality of the special effects, I will admit that the film looks much richer in 4K. You can’t polish a turd but watching this film in Ultra HD is as close as it gets. 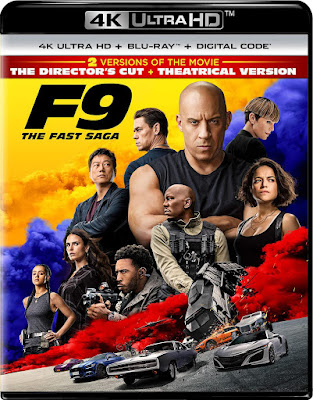