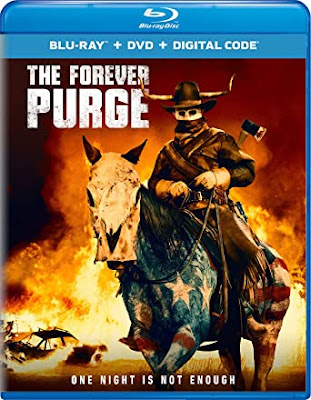 The subtlety of the Purge franchise ended with the decision to release an installment called The Purge: Election Year during an actual election year. Even set in an alternate/future America, there are clear parallels and commentary in each release of the horror film franchise, and The Forever Purge may be the most transparent of the series. With a conservative portion of the population deciding to refuse to follow the established rules of the system in a violent insurrection, it doesn’t take a genius to make the connection to the post-election Capital riots.

Even without that allegory, the movie directly addresses issues of immigration, the border wall, and racism in America. Unfortunately, by reducing the actual horror elements from the film, it plays out more like a fear-mongering liberal nightmare than a piece of entertainment. Horror movies are inherently political, but they should also be somewhat fun to watch. The Forever Purge gets so comfortable on a soap box that is seems to forget what genre it is.

Not so subtly set in Texas, along the border of Mexico, the film introduces us to a new set of characters just before the beginning of the newly reinstated Purge. Adela (Ana de la Reguera) and Juan (Tenoch Huerta) cross the border and obtain jobs. Juan works on a ranch belonging to Caleb Tucker (Will Patton), a man who is kind and generous, though his son Dylan (Josh Lucas) shows hints of racism. The Tucker family, including Dylan’s sister Harper (Leven Rambin) and his pregnant wife Cassidy (Cassidy Freeman), all make it through The Purge with their advanced lockdown shutters. Adela and Juan also survive the night by joining a group of immigrants who pool their money for protection.

As opposed to previous films, we see relatively little of the actual Purge. The film really begins to pick up the morning after the event has ended. An anarchistic group has planned a mass continuation of The Purge, with the primary intent of ridding the country of undesirables such as immigrants. Then there are some who are looking to balance the scales of wealth, which puts the Tuckers at risk. When Juan and his Mexican co-worker (Alejandro Edda) save the Tucker family from an invasion, the two groups band together in an effort to escape as refuges to Mexico. As mentioned, this film is not subtle in its satire, particularly not irony.

When certain facts are revealed about Adela and Juan’s past which explain their above average ability to defend and fight back against the ongoing Purge. At the same time, the film takes place in Texas and there is an indication within the set-up that this is reason enough for everyone to be comfortable handling weapons. What is unfortunate about this added development is that the narrative becomes much more action-focused, with the horror primarily only found in the creative mask and costume choices of the Purgers.

The Blu-ray release of The Forever Purge includes three ways to watch the film: the high definition Blu-ray discs, a DVD copy of the film, and a digital code for Movies Anywhere. The discs themselves also include a deleted scene and a storyboard presentation of the imagined alternate opening for the film. There is also a featurette on the wardrobe choices, which are a highlight of the film in terms of actual Purge elements, and a behind-the-scenes featurette.