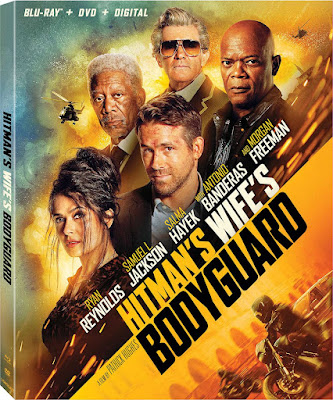 I wasn’t a fan of The Hitman’s Bodyguard. The humor was crass, immature, and lazy, but at least there was some decent action. Hitman’s Wife’s Bodyguard has doubled down on all the things that didn’t work in the first film, including jokes best suited for an audience too immature to be admitted into the film without guardian, while simultaneously decreasing the amount and quality of the elements that did work. There is still a decent amount of action, but it often devolves to cartoonish unbelievability. The number of times Ryan Reynolds is run over by a vehicle alone in this movie warrants serious questions about the thought process of the filmmakers.

After the close of the first film, we are led to believe that professional bodyguard Michael Bryce (Reynolds) has lost his license for saving the life of career criminal and hitman Darius Kincaid (Samuel L. Jackson). Deciding to take a sabbatical from violence on the suggestion of his therapist, Bryce is shocked when his vacation is interrupted by Kincaid’s wife, Sonia (Salma Hayek). With Kincaid kidnapped, Bryce joins Sonia to help save him, continuing the odd couple relationship from the first film. They are then enlisted by a violent Interpol agent (Frank Grillo) to help stop a plot by a madman (Antonio Banderas) to disable all of Central Europe. Why a disgraced bodyguard and two criminals are recruited to save the world is never fully explained, but logic is not the strong point of this franchise.

The first film was a straightforward action buddy comedy with a road trip format, but Hitman’s Wife’s Bodyguard confuses things, and not just with a title that’s a mouthful. The screenplay feels like James Bond meets Paul Blart, with the sense of humor of a 12-year-old boy. Suddenly we are in a spy film, but the heroes are incompetent, and the action goes from cool to ridiculous one moment to the next. Nothing really adds up, and the movie doesn’t slow down long enough to explain much, including the casting of Morgan Freeman as the father of Bryce.

These roles are made for Reynolds and Jackson. They capitalize on each of the strengths these performers bring just being themselves. It almost feels like the screenwriters felt that was enough and spent no time actually trying to write funny jokes. The first film was somewhat offensive in the laziness of the jokes, but this sequel is just boring and obnoxious. Very little is even enjoyable, and that is sad considering how much more money and talent was thrown at this film. Sometimes less is more, and I could have done with a whole lot less of these characters.

The Blu-ray release of Hitman’s Wife’s Bodyguard comes with a DVD and Digital Copy of the film, should you need multiple ways to watch it. My suggestion would be to use the digital code and watch the film on the go, when you have absolutely nothing better to do. Special features on the disc include a featurette about the cast, as well as a character featurette and one for the stunts in the movie. While the behind-the-scenes footage may be interesting for die-hard fans of the films or specific cast members, the highlight of the special features for most will be the gag reel. It appears the cast had more fun making this movie than I did watching it. There is also a theatrical trailer.