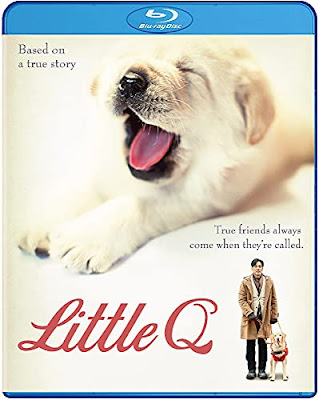 Being based on a true story often gives a film license to be a bit more melodramatic, and Little Q leans into this. On top of an untraditional structure that seems punctuated by dramatic life events, films involving dogs have endless potential for emotional moments. Following the life of a guide dog from beginning to end, there are more human characters and subplots than expected, not to mention all the anticipated canine moments. While there are some effective moments in the plot, they lack the same impact because of how often Little Q attempts to create an emotional response in the audience.

The premise is admittedly made for melodrama, even from the beginning. Adapted from the Japanese novel Goodbye, Khoru, Little Q starts with the training process for guide dogs, which begins almost immediately after they are born. The yellow lab with a unique birthmark is named Little Q and sent to the Chan family to be raised during his training. Young schoolgirl Chan Zhiqiao (Chutian Liu) builds a bond with the puppy, doing what she can to sabotage the training so that she won’t have to say goodbye. The first heartbreaking goodbye comes with the graduation from training, which means Little Q must leave the Chan household to be placed with a person in need.

When his training is complete, Little Q is sent to Lee Bo Ting (Simon Yam), a recently blinded chef struggling to come to terms with his disability. This is the main portion of the narrative and takes its time in building the relationship between the two. Lee is not initially open to the idea of a guide dog, which is understandable for someone coming to terms with their life drastically changing. What is a lot less understandable is the way he initially abuses Little Q, tossing him outside in the rain or refusing to take him outside to use the bathroom.

Little Q is almost taken away from Lee when the chef’s depression and suicidal tendencies consistently endanger him and the dog. A bond is built between the two, however, and soon Lee will not do anything without Little Q. The bond with the dog even allows Lee to begin working as a chef again, taking back a part of his life thought lost with the disability. This is the happiest portion of the film, before everyone starts getting sick and the melodrama takes over again.

Lee is the first, developing a heart condition that forces him to travel to the United States for a special operation. Because the recovery is extensive, Little Q is sent back to be with the Chan family, where his childhood companion has grown into a young adult (Angela Yuen). Although Q has a happy life, he still missing his companion and partner. As the health of the guide dog begins to decline, there is doubt whether Lee will make it back in time to see his loyal friend again.

Little Q takes so many detours along the path, and there were times I longed for a more straightforward dog movie. The path the narrative takes may have been better suited for novel form. The Blu-ray release of Little Q comes with no special features or extra copies of the movie.