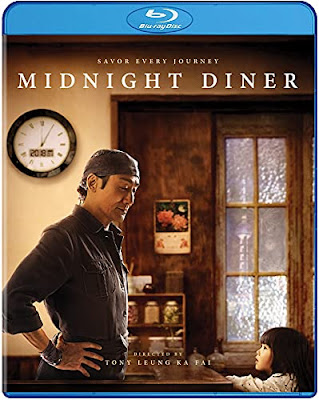 Midnight Diner opens with voiceover letting us know that there are midnight diners in many cities. Anyone familiar with the original manga series the film is based on should be aware of this fact, as there are versions of film and TV adaptations available in Japan, Korea, and China. This latest film adaptation takes place in Shanghai, though the premise remains much the same as it has in every adaptation of Yarō Abe’s internationally popular series. The narrative is highly adaptable because of the episodic structure. While the format allows includes a diner open from midnight to morning, the vignettes are made up in the variety of patrons.

At the center of each narrative is the chef and owner of the midnight diner, known only as uncle (Tony Ka Fai Leung). At the same time, although he is always present in the drama of his customers, the chef is also detached from the storylines. The result is that he is more of the narrator in telling the stories of individual customers rather than being involved in them himself. In the end, we know much more about the characters in each individual vignette than we do about the man who connects them all together.

Among these stories/customers are a collection of different tones. When a struggling boxer (Tony Yang) making a love connection with a nurse (Liu Tao) after his alcohol loving mother (Elaine Jin) begins to interfere, it is mostly comedic and lighthearted, while the romantic drama between two young lovers (Vision Wei and Zhang Yishang) struggling to accomplish dreams while remaining together has a bit more weight to it. There is also a pair of lovers impacted by a terminal disease, a perfume expert with a chance to reunite with an unrequited love, and a beat cop struggling with anger issues.

Though the stories sometimes overlap with each other, and characters from individual sequences find their way into the other vignettes, the movie is mostly episodic. One can imagine how much easier it would be to adapt this into a TV series, because there is resolution to individual sections without a concrete ending. The implication is that the chef will continue to cook at the midnight diner, and as long as he does there will be customers with stories to tell. As a standalone film, it there is a lot to take away from this feel-good narrative, even if the format may not be the best choice for this specific material.

There is a heavy emphasis on the visual presentation of the food that the chef makes early on in the film, and the photography plays a large part in this. As a result, the meals look even better on high-definition Blu-ray. Unfortunately, as the film continues, attention shifts more towards the characters than what they are eating, and this is less important. The greatest visual asset in the second half of the film are the nighttime views of Shanghai’s skyline, and fortunately they come into play in several of the storylines, even if it means leaving the diner for large portions.

Other than the high-definition presentation, there is nothing extra to be found on the Blu-ray. There aren’t special features or additional copies of the movie.