You might think that a film about an apocalypse which forces all of humanity underground would be relatable during the current pandemic, but Love and Monsters has themes that ultimately feel tone deaf. Fortunately, this is not the type of film that demands deep analysis. Even if the message of getting out in the world and taking some risks doesn’t perfectly align with the current climate, we can all use this type of escapist entertainment. Derivative and predictable as it may be, Love and Monsters is an easy view during a time when everything seems more difficult than it should be.

The film provides information on the apocalypse with voiceover narration and crudely drawn animation, setting up the tongue-and-cheek nature of the film. The fact that the voiceover is provided by a scrawny but intelligent young man makes comparisons to Zombieland inevitable, but with nearly all of the edgy humor and gory violence removed. What the film does have is a creative collection of monsters, though they are never outright scary.

Even though the world is overrun by mutated animals and insects, Joel (Dylan O’Brien) isn’t content to stay hidden underground. To make matters worse, each of the members of his small community has paired off into relationships, reminding him of the girl he left behind when the apocalypse began. After discovering his former girlfriend Aimee (Jessica Henwick) is in a community 85 miles away, Joel decides to risk the dangers of the surface to get back to her. Even though Joel isn’t the most adept at survival, he is helped out by a pair of survivors on the surface (Michael Rooker and Ariana Greenblatt), along with a dog that seems extraordinarily intelligent (as well as being the only animal seemingly unaffected by the apocalypse).

The film is light on plot and heavy on creature sequences. It plays like a much lighter and condensed season of “The Walking Dead,” with some of the humans being just as dangerous as the monsters roaming the world. The same proves true of the creatures, and the film takes a lot of joy in introducing new ones throughout the run-time. These base pleasures are not enough to give the film lasting significance after it has finished, but helps with the diversionary entertainment one is likely looking for from a film with such a campy title.

The 4K release of Love and Monsters is actually quite significant giving the high level of spectacle and CGI effects to be enhanced. At the same time, I struggled with the darkness and the motion blur. I adjusted it several times, but could find no acceptable alteration. Ultimately, I found myself longing for less clarity and a more traditional playback. The tradeoff for these motion issues is a spectacular depth of color. 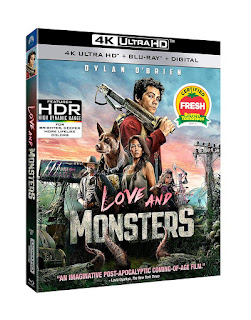 The Ultra HD release of Love and Monsters also comes with a Blu-ray disc, as well as a code for a digital copy of the film. The 4K disc only contains the film, but the Blu-ray also has an assortment of special features. Along with a handful of deleted scenes, there are two featurettes about the making of the film. The first is focused on the cast, while the second is about the production design and world-building.