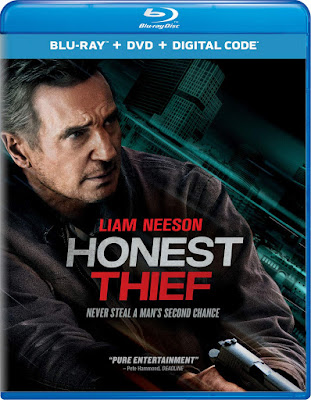 It is always interesting to watch an actor lean into the persona that they have become famous for, but I find it absolutely fascinating when an actor seems to reinvent the type of roles they are known for when they have a success that revives a career that is waning. It isn’t that Liam Neeson didn’t play tough guys prior to Taken, but he was probably better known for his intimate romance and drama. What is interesting about Honest Thief is that it promises a premise from Neeson’s recent filmography, while allowing him to play a character with softer sides that resemble older roles. Unfortunately, little else about the film is deserving of being called interesting, even if it serves as passable entertainment if you stumble on it streaming in a few years.

From the basic set-up of the film’s premise, the differences are clear. Although Neeson’s Tom Carter is a criminal, seen breaking into a bank safe in the solitude of night in the prologue sequence, he is also seen giving it up for the love a woman. Though she is unaware of his past, he was never violent and this appears to be a chapter he has had no problem leaving behind. But when their relationship develops into something permanent, Tom feels an obligation to be open with her. And in order to do this, he takes steps to first confess to his crimes and take responsibility.

Tom has the misfortune of being somewhat famous for his crimes after being labeled the ‘In-and-Out-Bandit’ by the media, resulting in many false confessions to the FBI. When Tom calls to make his own confession, it is all but dismissed by two cynical partners (Jeffrey Donovan, Robert Patrick), who pass it off onto younger agents John Nivens (Jai Courtney) and Ramon Hall (Anthony Ramos). These agents show up expecting a false confession, but are shocked to see a storage unit full of cash, and decide to take advantage of the opportunity. Even though Neeson begins the film as a criminal, it isn’t long before he is the one working for justice in the narrative.

There aren’t many surprises in the film’s plot. There are the usual chase scenes and fight scenes we have come to expect from films such as this, and very few risks or twists that can’t be seen coming. It is safe storytelling, even for a PG-13 Liam Neeson film. There is never really much danger of anything but a happy ending, so the suspense never really holds much weight. When the best thing you can say about a film is that it ‘wasn’t terrible,’ that is problematic. However grateful I am that it didn’t reach the awful level of the worst Taken sequels, I do demand a bit more than that from my viewing choices.

The Blu-ray release of Honest Thief also comes with a DVD copy and digital copy. On the discs themselves, however, there are no special features at all.