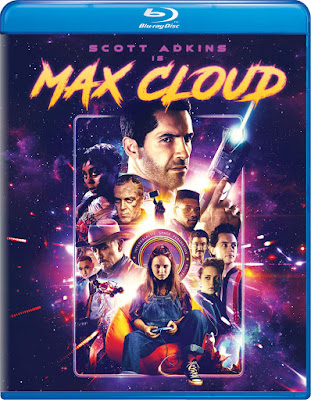 Campiness used to be a kind way to justify the enjoyment of poor filmmaking, but now it is an intentional stylistic choice. Max Cloud is so over-the-top that one hopes it to be an example of the latter, but the intention of the campiness does not equate to quality or enjoyment of it. And it does not equate to originality, which this film has little of. The budget is obviously low, but it doesn’t take a lot of money for halfway decent humor.

The basic premise of the movie involves a teenage girl named Sarah (Isabelle Allen) who gets sucked into her favorite video game when she discovers a secret portal, blatantly ripping off the successful Jumanji reboot. Setting this portion of the film in the 1990s adds to the campiness of the style, though much of the film in the video game world is far more reminiscent of the 1980s sci-fi space adventures that came in the wake of Star Wars.

Once in the video game, Sarah becomes the minor character of Jake (Elliot James Langridge), a bumbling cook on the spaceship of the legendary Max Cloud (Scott Adkins). His arrogance is only matched by his abilities to kick ass, which is done in cheesy 80s video game style. After their spaceship has crashed on a planet that is home to an intergalactic prison, Sarah and her video game hero must find a way to survive the main boss, Revengor (John Hannah).

The prison setting premise is nearly entirely wasted, mostly because each of the sci-fi space scenes, whether in the ship or in the prison, basically have the same generic low-budget look to them. The production design is fine, but only if the budget it taken into consideration, or if you are able to buy into the idea that it looks bad because video games in the 90s were the same. The same applies to the action in the movie.

At times the film is violent, but never with a level of realism that removes it from the video game world. What is truly confusing is the casting of Adkins, who is known for his actual martial arts abilities rather than his acting. And yet, the role of Max Cloud only requires a few generic and cheesy martial arts moves, relying far more on the kind of campy acting we used to get from Bruce Campbell. Unfortunately, Adkins is not quite strong enough as a comedic actor to pull off this kind of role convincingly or enjoyably.

The Blu-ray disc may actually do a disservice to this film, which tries to simulate lower definition in the graphics and design. On top of that, there are no special features to mention. All in all, there are far too many reasons to pass on this adventure.