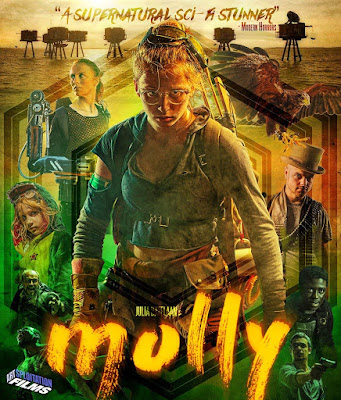 In a barren world that has been ravished by war, a young girl named Molly (Julia Batelaan) wanders around the landscape on her own. We are given brief glimpses into her past through flashbacks, but the narrative has little dialogue and primarily tells the story visually. This was likely a calculated decision, as the actors all speak English in what seems to be an effort to make the film more universal. Unfortunately, when the actors do speak, they don’t always come off naturally in a language that clearly isn’t their first.

There is also a slow start to the narrative, and the near silent journey also runs the risk of being a bit dull. A lot of time is spent with Molly alone, watching the intricate details of her survival methods. And when the action finally does begin, it is more notable for the ambition of the filmmaking than any impressiveness in the storytelling. Much of the camera work floats through action scenes, rather than editing a series of shots together. This puts a lot more pressure on the fight choreography, which often reads as a bit stagey as a result. It also doesn’t help that Molly has special powers, but only actually utilizes them a few times in the film.

The ambition of the camera and fight choreography reaches new levels in the film’s climax, with 30 minutes of an apparent uninterrupted take. It is possible that there are invisible cuts in there, but that doesn’t take away from the carefully choreographed sequence. Unfortunately, the impressiveness of the ambition is so showy that it takes away from the actual narrative. It felt like a movie that’s sole purpose was to show technical prowess, and I didn’t care about the story or characters as a result. It also didn’t help that the narrative was basically the same that has been used in numerous superhero and postapocalyptic narratives, and that the actors all came off a bit false. There are some impressive things about Molly, but not nearly enough to make up for the film’s shortcomings.

The Blu-ray release for Molly comes with a 30-minute making-of featurette, giving some insight into the impressively low budget shoot and the intricacies behind some of the more ambitious elements in the production. There are also additional production stories in the commentary track with co-directors Colinda Bongers and Thijs Meuwese. The last extras are just trailers for additional Artsploitation releases.