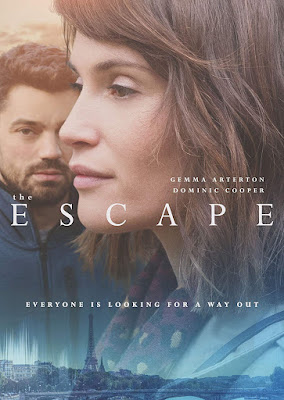 Tara (Gemma Arterton) is a frazzled housewife in suburban London, struggling to come to terms with the feelings of entrapment that her life of routine and boredom bring. Although it isn’t verbalized adequately through the screenplay, Arterton’s performance makes it clear that Tara is overwhelmed by the constant attention her children and husband seem to demand from her. Even though the worst thing her husband (Dominic Cooper) can be accused of is obliviousness, we are meant to sympathize with Tara’s desire for freedom over her husband’s longing for answers.

The Escape has little empathy for the husband’s struggles within the narrative, making him an odd balance of demanding and detached. At moments he seems to smother her with affection, oblivious to the looks of revulsion in his wife’s face. Even when she cries during sex, he is somehow unaware. But the film also chooses to go down a cliché path of marital infidelity, despite a lack of affection never seeming to be the problem with Tara’s marriage. But then again, we never truly know what the problems are inside of Tara’s head, and the resolution of this situation is as ambiguous as the reasons for her depression. Perhaps that is the point. In providing the audience with few details, it allows audience members to utilize their own emotional experiences/baggage in the interpretation.

The Escape is not a fast-paced film. Often director Dominic Savage seems to be putting the audience through an endurance test of monotony and annoyance. The more we are forced to endure the demandingly dull routine demanded of Tara and the more the soundtrack is filled with the sound of her ceaselessly screaming baby, the more we begin to understand the desire for escape. Unfortunately, it also resulted in a desire to stop watching the movie, and that is a desire that was not overcome by the resolution of the narrative.

The DVD has a behind-the-scenes featurette, interviews with the cast and filmmaker, and a trailer.