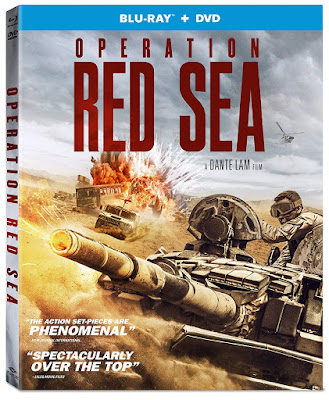 The great claim of Operation Red Sea is that this China’s first modern naval film, loosely based on the evacuation of 225 foreign nationals and nearly 600 Chinese citizens from Yemen during their Civil War in 2015. Because of this, realism is certainly a priority in the filmmaking, but not without sacrificing the desire for splashy spectacle. The result is something between Saving Private Ryan and an action film starring The Rock.

The biggest problem with the format of the film is the difficulty distinguishing differences in the various soldiers. Not nearly enough time is spent on character development early on, so that many of them blend together as a unit. This is not a huge issue for a film such as this, all except for the moments that the filmmaking hopes to inspire an emotional response from the audience. With a closer connections to the characters, these typical cinematic manipulations might have felt less contrived, but we can’t mourn the loss of characters we never got the chance to care about.

In all fairness, however, the characters are less likely to be the reason to watch a film like this. The grandiose spectacle of the battle scenes, whether focused on the actions of an individual or the efforts of a whole platoon, is where the strength of the film lies. This is a film about an naval mission, so there is some time spent on a battleship, but a majority of the film is on the ground in Yemen as an elite group of soldiers attempt to get innocent people to safety. There is special attention given to the snipers, especially since the team loses one during the opening sequence.

Adding fictional drama to the real-life situation, a journalist in the convoy discovers that a terrorist group is using the coup to obtain nuclear material. As with Operation Mekong, Operation Red Sea often veers away from realism and towards polished spectacle in its action sequences, but attempts to do so in service of national pride. It is understandable that some might see this as something propaganda adjacent, but it is also possible to watch the film for the action alone.

The Blu-ray release also comes with a DVD copy of the film, though high definition is the idea way to experience the battles. The sound is especially effective with the right surround sound system. The special features on the discs include deleted scenes, though most of them are rather brief. Also included is a trailer gallery.