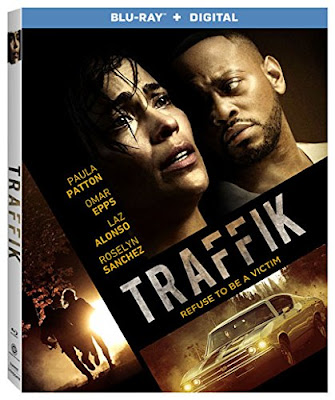 When Brea and John are unexpectedly joined at the cabin by their friends Darren (Laz Alonso) and Malia (Roselyn Sanchez), there are additional victims to drag out the familiar home invasion storyline. It follows the structure of a horror film, more interested in providing victims and cheap thrills to the narrative than a realistic depiction of the crimes at the center of the story. And the poor choices of the characters often make it difficult to root for them to survive, or care when they don’t.

The Blu-ray release of Traffik includes two promotional featurettes, along with a digital copy of the film. The first featurette, “Journey into the Depths” is a basic making-of featurette, slightly longer than average at 16-minutes. The second featurette, “Deon & Dante” focuses on cinematographer Dante Spinotti, with interviews from writer/director Deon Taylor.