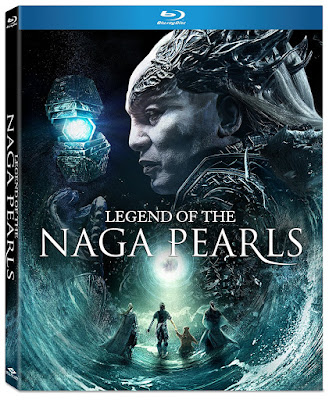 Each summer there are a number of lazily made blockbusters released in the United States, and Legend of the Naga Pearls serves as evidence that these failures are a part of the Chinese film industry as well. While there is some entertainment to be had in the spectacle of the film, Legend of the Naga Pearls often feels both narratively convoluted and visually incomplete, from the very first CGI-filled shot to the last. Even the most dedicated fantasy and martial arts fans are likely to be left under-whelmed.

As is the case with most fantasy films, there is a complex back-story involving the mythology of the winged tribe led by the ruthless Xuelie (Simon Yam). Defeated in battle by the humans long before the beginning of our narrative, these winged soldiers set out to find a box containing the Naga Pearls, which will allow them to eradicate the human race in some unclear manner that ends up resembling something out of a Marvel movie. A lowly human thief named Ni Kongkong (Darren Wang) steals the box containing the pearls when he feels a connection to it due to a glowing light coming from his hand. He is almost destroyed by Xuelie until a fallen member of the winged tribe (Tian’Ai Zhang) joins forces with the thief in order to protect him and all of humanity.
Ni Kongkong is not an ordinary thief, both because of the unexplained glowing coming from his hand and his pet/sidekick that comes in the form of a magical little creature. Beyond the cartoonish appearance of this creature made up entirely with cheap CGI effects, it feels like an addition made mostly to please the younger audience members. This is even more apparent when the armadillo-looking creature is mostly used as a weapon that bounces off people like a dodgeball, and for his potent flatulence used to disarm the enemy while in battle. It’s silly and badly designed, and feels somewhat out of place in a movie that also contains some fairly graphic violence.
The high definition presentation of the film on Blu-ray does little to help the digital shortcomings of the movie, although I suppose it does offer a more detailed look at the production design and make-up effects. There are no special features to go with the film. The lack of faith in the film’s popularity is fitting.