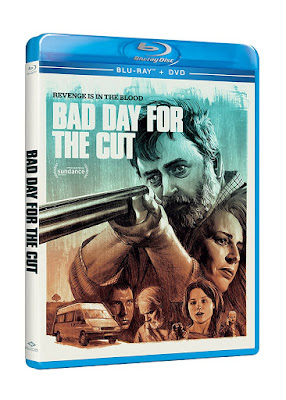 Revenge films seem a dime-a-dozen these days, though Bad Day for the Cut has a few elements which help it to stand out from the rest. First of all, there is the fact that it is set in Northern Ireland and within the criminal underworld of Belfast, giving it a unique flavor along with the need to turn on the English subtitles through some of the dialogue featuring thicker accents. But even more important than the setting is the choice to make this as much a mystery as it is a revenge film. Our protagonist seeks more than just vengeance, but also answers to the motivations behind the inciting violence, which keeps viewers engaged even throughout the film’s more derivative moments.

Our protagonist (or anti-hero, depending on your perspective) is Donal (Nigel O’Neill), a mild-mannered middle-aged farmer living with his elderly mother in the remote country. When a home invasion results in his mother’s brutal death, Donal sets out to find answers. When he discovers the people responsible had come with the sole intention of hurting his mother, Donal becomes the next target. After fending off a second assault, Donal teams up with one of the attackers named Bartosz (Józef Pawlowski), a young Polish man who was blackmailed (by a fierce Susan Lynch as the film’s lead villain) into participating. Donal discovers that the same people who killed his mother are also holding Bartosz’s sister (Anna Próchniak) hostage, and the pair set out to take down the criminal organization, set her free, and find the reason for his mother’s murder.

The answers, however complicated they may be, are fairly predictable at a certain point in the narrative. What keeps the film engaging, even beyond the mystery at the center, is the darkly comedic tone applied to the violence in the film. While this never diminishing the impact of the violent sequences, it adds memorable layers to what might have otherwise been a straightforward thriller. Calling this the Fargo of Belfast may not be the perfect description, but it isn’t too far off. No matter how gruesomely graphic some of the sequences of violence may be, the tinge of humor keeps it from becoming overwhelmingly bleak, while the comedic edge is also never used to diminish the emotional impact of the narrative.  It is a delicate balancing act that director Chris Baugh handles with confidence befitting a seasoned filmmaker. Although Baugh’s screenplay (co-written by Brendan Mullin) never rises too far above average, the director proves himself one to watch with this theatrical feature film debut.

The Blu-ray doesn’t have many amenities to make the high definition release a necessary upgrade, especially since it is quite noticeably a smaller budget film in many places. This is not to say that it is an ugly film, but some of the scenes are quite dark and difficult to see, and high definition does little to improve that. The unpolished look of the movie seems to go with the exploitation elements of the narrative, and DVD would not detract from this experience any more than the Blu-ray improves upon it. Cinematography aside, however, the violence in the film never seems to indicate a lower budget than was necessary. It appears that the filmmakers had their priorities in check, especially considering the audience that this type of film is best suited for.

You may watch movies free online download storyboard templates online at no cost.