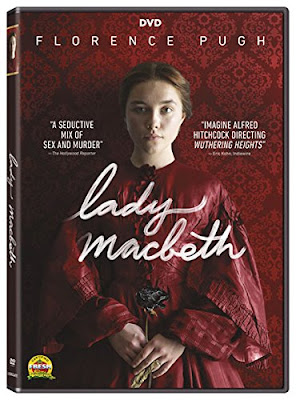 We join Katherine (Pugh) in on her wedding day in a rural England estate, 1865. This isn’t a marriage made of love, however, and Katherine is treated with disdain by both her husband, Alexander (Paul Hilton) and his father, Boris (Christopher Fairbank). While this dynamic is so needlessly cruel, Katherine’s gravitation towards another form of animalistic man is somewhat baffling. This is the biggest problem with the sparseness of the screenplay by Alice Birch. While it provides a great deal of opportunities for Oldroyd to allow the camera to be the storyteller, the lack of dialogue gives us little insight to the motivations of nearly any character on screen.

Although Alexander and Boris expect specific behavior from Katherine, they also spend a great deal of time away from the estate, which she mostly spends sleeping until the discovery of Sebastian (Cosmo Jarvis). While exploring the estate in her boredom, Katherine happens upon Sebastian and a group of other workers in the process of assaulting and demeaning the house maid (Naomi Ackie). Rather than being disturbed by this, Katherine is somehow drawn into an affair with Sebastian in her husband’s absence. After an intended rape turns into consensual sex, Katherine finds another reason to spend all day in bed.

The world of Lady Macbeth may be limited to the single estate in rural England, but it feels lived in and real. The film itself is single-minded in its premise, and carries it out with precision. I’m just not sure it was enough, however expertly it was accomplished. Impressed as I was with the filmmaking, I was letdown by the lack of depth in character development, even if that was done intentionally in order to better highlight the aforementioned filmmaking. Even if the film as a whole didn’t completely win me over, the images are stuck with me, along with the discovery of an impressive new talent in Pugh.

The DVD release of Lady Macbeth comes with a couple of special features, including a behind-the-scenes featurette and a photo gallery from the production.