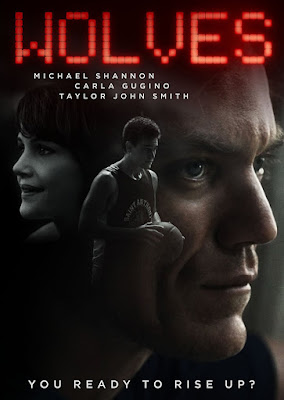 That star player is Anthony Keller (Taylor John Smith), whose skills and chances at attending his dream university of Cornell are likely thanks to the harsh parenting style of his father, Lee Keller (Michael Shannon). At the same time, Lee’s petty jealousy and weak character threatens to destroy the same opportunities that he helped build for his son. Constantly flexing his muscles to prove dominance over his son, Lee resembles the father from The Great Santini, only with more vices. He has a drinking problem which is only surpassed by his gambling addiction, and has the bad habit of taking out his frustration as a failing writer and mediocre college professor on his son with unexpected outbursts of violence, usually under the guise of tough love.

Lee is such a tornado of raw emotions and character flaws, the film often feels as though it should belong to him rather than the son whose defining characteristic he describes as “silence.” Anthony feels much more like a pawn in the narrative than a strong character, despite writer/director (and husband to star Julianne Moore) Bart Freundlich’s efforts to give him more to do by adding in unnecessary subplots such as an accidental teen pregnancy, a bullying teammate, and a fleeting friendship with a local street ball player (John Douglas Thompson) who loves to wax poetically. Anthony is even the catalyst for his mother (Carla Gugino) realizing the failings of her husband, though only after watching him abuse her son for a majority of the film.

It would be far easier to dismiss Wolves as contrived melodrama undeserving of praise if it weren’t for the commitment of the cast that Freundlich is able to get in crucial roles. At the same time, Shannon and Gugino are so good as the parents battling over the future of their son that it often dwarfs the actor in the underdeveloped lead role. When Anthony is finally given the opportunity for action in the final basketball scene, it is done with the most contrived of all sports clichés, and in a way that inexplicably makes his motivations unclear. As a sports film, Wolves is underwhelming. As a family drama, it survives a contrived screenplay only due to the massive talent of the two actors Freundlich was lucky enough to cast.

The DVD release of Wolves has no special features.