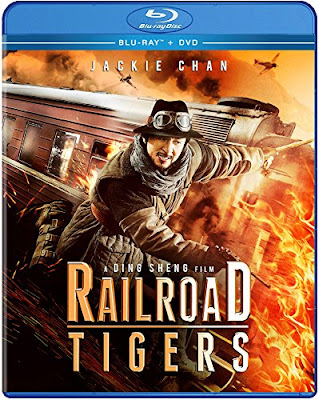 Chan heads up the cast as Ma Yuan, a leader in a group of railroad workers (which include his own son, Jaycee Chan) who secretly work as bandits stealing food and supplies from the Japanese troops in 1941. Although they are quietly resisting the Japanese, the group laments the fact that they can’t contribute more to the fight, until a wounded resistance soldier stumbles into Ma Yuan’s home late one night with a plan. He explains the importance of destroying a bridge that the Japanese are using to deliver supplies, and the ragtag group of railroad workers takes it upon themselves to complete this task.

Much of the film is spent poking fun at the general incompetence of these amateur resistance fighters, while making their bumbling enemy even less successful at stopping them. Plan after plan fails, but they refuse to give up on the mission they have adopted for themselves, even when the odds are clearly stacked against them. This allows the film to balance between slapstick humor, impressive action, and lighthearted sentimentality. While the humor and action often blend with each other, there is less effectiveness in adding the drama to an otherwise lighthearted film. Most of the character development is superficial, so that we can laugh with ease, but it also makes caring about these characters a hard sell. Railroad Tigers becomes far more about the spectacle of set pieces and cleverness of its gags than plot or character development, which aligns it even further to the structure of silent comedies.

The Blu-ray release comes with a DVD copy, as well as special features on the disc. A high definition presentation is still the preferred format to watch the film, especially in order to improve the visuals of the CGI effects in the climactic sequence. The budget is noticeably lower than most Hollywood blockbusters, and some of the stunts look even more artificial in standard definition. The extras include a featurette on these visual effects, as well as one on the stunts and a more generic making-of promotional feature. The last of the extras is a featurette on the characters, which are not nearly developed enough in the film to warrant this treatment in the special features.