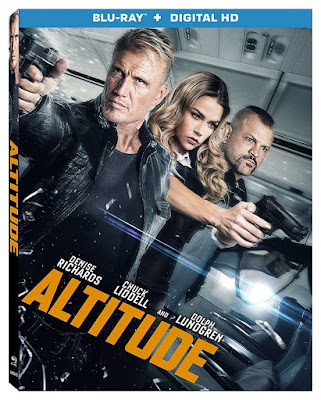 The film begins with an unbelievable hostage negotiation which will set the tone for the rest of the film. Rather than allowing a sniper to take out the man holding people hostage, or doing her job in talking him down, FBI agent Gretchen Blair inexplicably rushes into the hostage situation undetected (while still talking to the suspect on the phone) and tackles him instead. This would be an unbelievable scene with a more convincing actor, but with Richards it becomes a complete farce. Reprimanded for her insubordination, Blair is sent back to Washington D.C. when the plane she is taking coincidentally gets hijacked.

The plane is being taken over by a group of criminals who were robbed by a fellow thief (Jordi Vilasuso), who also happens to be seated right next to Blair. This thief offers Blair a large sum of money to protect him from the hijackers, and somehow this Playboy model is able to single-handedly take down all of the bad guys. What follows is a generic onboard action movie with very little convincing action, and even less believable acting. It is everything you might expect of a plot description such as this, only worse.

The casting of Richards was a horrible choice, but it aligns with the obvious intentions of the filmmaker: get as many name actors in the cast as possible, regardless of how poorly suited they may be for the roles. On top of Richards being a tough negotiator who fights her way out of the situation, the cast also includes grown child actor Jonathan Lipnicki (Jerry Maguire) in a strange role as a flamboyant flight attendant and UFC fighter Chuck Liddell as a walking prop. Liddell may look the part of a criminal who hijacks a plane, but he is basically just a glorified extra in this film. But the worst crime of all is the casting of Lundgren only to keep him confined to the cockpit flying the plane for nearly the entire film.

I could go on, but anyone who has read this far and still chooses to endure Altitude will be getting what they deserve. The Blu-ray includes a Digital HD copy of the film, but no special features on the disc.