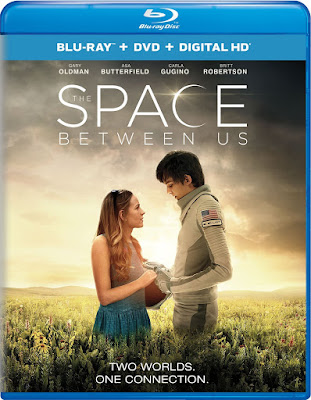 There are so many plot holes in The Space Between Us that it is nearly impossible to even give a basic description without addressing them, not to mention the countless minor ones that manage to taint every scene of the film. Even the end credits are plagued with idiotic spelling errors that could easily have been fixed with a modicum of competency. We begin with a mission to Mars that is meant to save humanity by establishing life on the hostile planet. Soon after a group of scientists are launched into space, it is discovered that one of them is two months pregnant. We are meant to believe that there were no physical examinations or blood tests two months prior to their departure, mainly because there would be no movie without this huge gap in logic. Rather than return to Earth, the existence of the pregnancy is kept secret and the infant is raised on Mars after his mother dies during childbirth.

Sixteen years later Gardner Elliot (Asa Butterfield) longs to see Earth, and somehow convinces the same people who have kept his existence a secret to make a trip back to the planet to grant this wish. Let’s forget the fact that a trip like this would insanely expensive and that none of the scientists were ever supposed to return home. Let’s ignore the amount of time it would take for this journey to be completed. More important to the story is the fact that Gardner wants to meet a teenage girl named Tulsa (Britt Robertson), who he has been chatting with online, and to find his father, who he knows nothing about.

Once Gardner returns to Earth, the intelligence he had on Mars somehow disappears in order for the film to turn into a fish-out-of-water narrative. We are meant to believe that Gardner knows nothing about Earth, even when the story absolutely contradicts itself in order to make this possible. Even though Gardner has the ability to chat with Tulsa on a daily basis, he somehow has no working knowledge of basic things that could have been learned with internet access. He even acts surprised when he first sees a horse, despite being raised by a group of scientists that could have taught him something so basic. He has no clue how to interact socially, even though he was surrounded by other humans in space. He even acts surprised when first encountering a vehicle on Earth, completely ignoring the scene where he takes a buggy out joyriding while on Mars. This doesn’t even include the smaller errors in the film which could easily have been avoided, such as the scene where Tulsa tells Gardner to get out of the car as they both are standing outside of the car.

You might think that I am being too harsh on a film meant for younger audiences, but the main narrative once on Earth involves Tulsa and Gardner acting in a manner that would be irresponsible to allow kids to watch. After running away from authorities, the pair steals cars, clothes, money (some of which is taken from scientists in the space station, despite there being no reason to bring your wallet to Mars), and basically anything else that they need. Then there is the fact that there is a completely unnecessary sex scene, which occurs only minutes after Gardner has had his first kiss. Not only is it morally questionable, the age difference between the lead actors also makes it feel more than a little sleazy. Robertson was in her mid-20s during filming, and although Butterfield turned 18 during the shoot, he looks several years younger than he is. The end result feels like a 10-year age gap, not to mention chemistry between them that consistently feels forced.

The acting throughout the film is a bit unbearable. Robertson is one of those actors that entered the film business shortly after exiting the womb, but has yet to give a performance that is impressive rather than simply annoying. And I think we can all be relieved that Tom Holland was chosen to play the latest incarnation of Spider-Man over Butterfield. Even the casting of Gary Oldman and Carla Gugino as the film’s sole adults can’t save a single scene from feeling like an insult to the intelligence of filmgoers. Oh, and just in case I didn’t point out enough errors in logic, there is also a very hokey scene in which Gardner buys a Mars candy bar (simply because he’s from Mars) despite the candy having been discontinued from the United States for decades.

The Blu-ray release boasts an alternate ending (though it does nothing to fix the many problems with the film) along with nearly 14-minutes of additional deleted scenes. There is also a director’s commentary by Peter Chelsom (who also brought Hannah Montana to the big screen) and a brief promotional featurette that basically just rehashes the plot and praises the cast for four minutes.