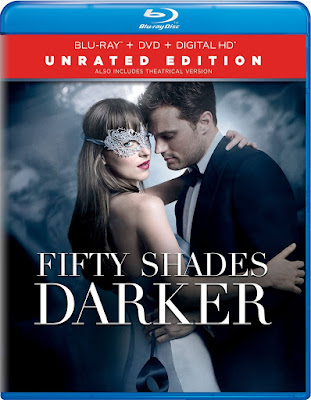 We return to the so-called romance between Anastasia Steele and Christian Grey (seriously, who the hell thought these were good character names?), despite their separation at the end of the first. After trying to accept the rules required by Christian (Jamie Dornan), Anastasia (Dakota Johnson) realizes that she can’t handle the fact that he is aroused by causing pain. Fifty Shades Darker allows us a brief opening where the characters stay true to how they were written, before both suddenly change their personalities. Christian decides that he wants love instead of his typical sadistic abusive relationships, and Anastasia suddenly becomes the initiator in many of the S&M situations. How can this poorly written narrative justify their sudden shift? It doesn’t have to, because this film is nothing more than a pathetic fantasy narrative never even remotely grounded in reality.

The real reason many people will likely see this film is the sex scenes, which are increased in quantity while somehow getting a great deal tamer in actual content. I’m sure there are those who are actually invested in the romance between these two cardboard cutouts, but the elements of love are essentially carried by the film’s soundtrack far more than the dialogue or any acting abilities of the stars. The film at least attempts to shoehorn in some romance in-between the vanilla sex scenes, even if it will likely only affect those already invested. The unrated cut of the film may feature nearly 15-minutes more footage, but there is only one additional sex scene and nothing new added to those existing. Extended cut would be a far more appropriate way of classifying it, rather than unrated. While it is true that this cut was never submitted for rating, there is absolutely no doubt that it would still be a very flaccid R-rating. I had to make a strong effort not to fast forward several times throughout this uneventful and bland movie.

Exclusive to the Blu-ray release are four generic featurettes, which are as melodramatic as the film itself despite being just as dull. The title of this film itself should be considered false advertising, as this sequel is no darker and certainly no sexier than the cartoonish first. It simply goes down smoother because audiences either expected the worst or don’t care about the quality as much as their unrealistic fantasies being fulfilled onscreen as they never will be in life. In addition to these four Blu-ray promotional pieces, there is another with the cast and filmmaker praising their own film. Also included is a 30-second tease of the next film (although anyone who gives a rat’s ass likely already knows what it will contain) and a 3-minute discussion with “author” E.L. James discussing her “books.” The deleted scenes are no more than two one-minute scenes that have absolutely no value whatsoever. This package also comes with a digital copy, for those not too ashamed to watch this film on the go or on a computer with the rest of the basic porn.