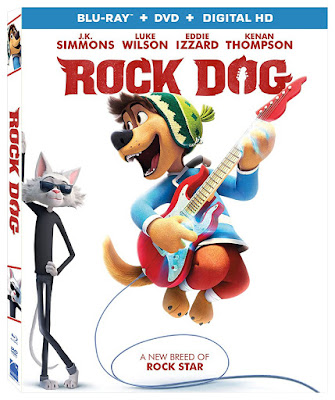 Rock Dog resembles one of those generic cartoons you put on for children, the kind that are not meant for adults and provide only basic distraction for its intended younger audience. Don’t anticipate any of the characters becoming a household name. If your child is old enough to remember any of them, they are also likely too old to enjoy it. More than anything, Rock Dog feels like a poor amalgamation of several far more successful films in recent past. Imagine Kung-Fu Panda combined with Sing (and a little bit of Zootopia), but without any catchy music, none of the awesome martial arts, and very few laughs. The animation also feels like it was made a decade ago.

The film begins with a hand-drawn prologue sequence that blatantly borrows both narratively and stylistically from the Kung-Fu Panda franchise, giving the back-story of a village of sheep in Tibet. After an attack from a group of vicious wolves, only a mastiff named Khampa (voiced by J.K. Simmons) stands in their way. In order to prevent future attacks, Khampa inexplicably bans music and attempts to train his young son to follow in his footsteps, including some type of unexplained mystical abilities that the dogs somehow have. But Bodi (Luke Wilson) has less interest in the sheep and his responsibilities once an airplane accidentally drops a radio into their village, introducing him to the most generic of rock music.

The premise taken from a Chinese graphic novel (Zheng Jun’s “Tibetan Rock Dog”) is initially clever, but quickly wears out its welcome with generic slapstick and predictable sentimentality. Bodi inevitably decides to follow his dream, traveling to the city below in order to become a rock star like his idol, an entitled British rock star cat named Angus Scattergood (Eddie Izzard). There are many who don’t believe in Bodi’s abilities, so we know he will eventually succeed. Where the film takes a strange turn is in the decision to have the wolves follow Bodi into the city. Already over-stuffed, the narrative then begins to integrate gangster narratives as the incompetent wolf crew tries to take Bodi out, losing sight of the sheep that they supposedly still desire.

Rock Dog is harmless entertainment, but that doesn’t make it at all good. As a Chinese-Hollywood co-production that feels developed to imitate previous animated successes, this is the type of film that feels formed in a board room, using algorithms for success rather than any inspired creativity or individuality that the narrative ironically promotes. And for a film about an aspiring musician, many will be disappointed by how little music there actually is amidst the various threads of the narrative.

The Blu-ray release comes with a DVD and Digital HD copy, as well as the extras included on the disc itself. Those include four featurettes and a music video. There is a typical making-of featurette, as well as one about the casting of the voice actors. The other two focus on the music and the animation in the film.


If you have a look around the world these days, or even turn on the television for a couple minutes, you will notice a severe absence of strong male role models go here.

Deadpool watch movie on the internet is a small odd. Find more interesting information about this visit here free fmovies