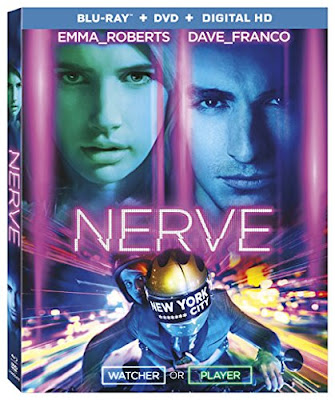 Nerve boasts an original idea with relevant modern commentary on the digital age and an over-reliance on social media for feelings of self worth, though it often feels like a creative concept destroyed by poorly drawn characters and increasingly idiotic plot twists. Individual traits only seem to exist in order for each character to shift the narrative where it needs to be, altered at the drop of a hat without consideration of consistency. The story manipulates everything in Nerve, including the audience. Rather than intelligently applying its themes, directors Henry Joost and Ariel Schulman merely cram them into a typical action movie formula.


Joost and Schulman fell into a career as filmmakers with the surprise success of the documentary Catfish, a story which should give them unique insight into the warped world of social media. Nerve begins with typical high school teen drama, despite nearly every actor being over 25-years-old. Emma Roberts may have the build and face of a teenager awkwardly navigating through puberty, but I don’t know if I can watch her play a high school student for yet another 5 years. Worse yet, Roberts’ character of Vee Delmonico is consistently inconsistent throughout the film. Beginning as a mild-mannered photographer—someone more likely to take a picture of an event than to be involved in it—the movie then attempts to make an action star out of Vee in a way that is never believable.

After being embarrassed by her frenemy, Sydney (Emily Meade), Vee impulsively joins an online game of dare that all of the cool kids are playing. Sydney is a ridiculous character, whose only purpose is to move the plot along with inconsistent behavior. At first she appears to be the villain in the film, but the only real enemy is the mass-mentality of mindless internet drones. This commentary might have been more pointed had the filmmakers not devolved the narrative into a stupid action movie with a ridiculously illogical ending, which also tacks on a pointlessly preachy message about social media that is cancelled out by the film’s fascination with it.

The game only really starts for Vee when she pairs up with another player of the game, Ian (Dave Franco). Regardless of what it says about gender roles that Vee only becomes relevant when paired up with a male partner to do much of the game’s heavy lifting, how unbelievable it is that a grown adult (Franco is 31) would be romantically linked with an under-age high school student, and the obvious missing chemistry between these leads, the character of Ian is the only realistic explanation for Vee’s sudden decision to become a daredevil. There are moments within the film that we are teased with the possibility of Ian’s untrustworthiness, but ultimately there are no bad guys in Nerve beyond the internet itself.

The online game within the film gives visitors the option of paying to watch the game or being paid to play it, and the Blu-ray release has two similar categories for the special features. Advertised as having “Watcher” and “Player” viewing modes, Nerve simply uses these two categories to split up the special features, which are otherwise fairly generic. The actual viewing of the film is completely unaltered. Special features in the “Watcher” mode include 15 character video entries, with additional footage for two of the dares from the game. All of these individual extras are only a few minutes each or less. The “Player” mode doesn’t seem that much different, providing biographies for the main players. There are also two interactive features in this category, including a quiz to determine whether you are a player or a watcher and an interactive game of dare. Also included with the Blu-ray release is a DVD and Digital HD copy of the film.