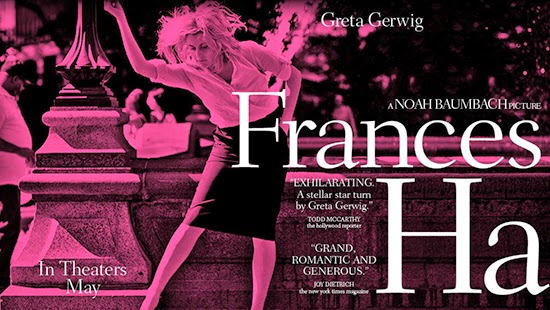 To my dismay, this film was met with an array of critical praise while I found it difficult not to throw items at the screen while enduring its minimal running-time. I suppose it should come as no surprise that the critics loved this film, as it is a house built upon nepotism and egos that most would rather not disturb. I could give a fuck. On that note, let's get started.


Though pretentiously filming in black-and-white while imitating French New Wave, Woody Allen and Jim Jarmusch in the narrative, director Noah Baumbach is the least horrendous element in this feature despite tending towards material I find distasteful in the basest sense. His work has consistently dealt with unbelievably uninspiring and flawed individuals, and I find it a chore to endure their company for even a mere ninety-minutes. I actually enjoyed Greenberg, though that was mostly due to Ben Stiller’s natural likeability despite the script’s every attempt at the opposite.  Francis Ha may be one of the lightest narratives that Baumbach has taken on, but the characters are no less distasteful.

Heading up the cast and author of the vomit-inducing screenplay is Greta Gerwig. Since Gerwig shat onto screen in the detestable Mumblecore movement of the independent world, I have been shouting from the rooftops how much I actively despise her contributions. While reviewing the film The House of the Devil, I described Gerwig’s mumblecore style of acting as “purposefully lazy and annoying.” I also found the most enjoyable part of her performance to be her demise and asked her to “Go back to mumblecore and stay there, please.” Looking back, this may have been a bit harsh. As she acts out a role she wrote for herself in Frances Ha, one which likely has much of her own personality in it, Gerwig proves that she is a good actress in the right role. It also happens to be a role that I actively despise in every capacity. is petty, immature, rude, narcissistic, and Frances Ha has the same narrow-minded ideas about this detestable woman’s significance or importance.

Every character in this film is absolutely horrid, and none of them are the type of people I would want to know in real life. This makes me wonder why I am even spending the time to watch a movie about them. The characters say rude things to each other and that is where the film’s humor comes from, although the insulted parties hardly ever notice for lack of interest in anything more than two inches from their own face. Every character is so entirely self-involved that they all appear to be awful friends. This movie is like the anti-“Friends.”

The worst of all these people is Frances, who bad-mouths her “best friend” behind her back because she has found a guy. She lies about her career as a dancer, which is probably terrible because of her horrible work ethics. She claims to be an artist, but is really just lazy and full of herself. She can’t understand why the world doesn’t just open up and give her things without having to work at all, even deciding to go on impulse to as a response to the loss of her job. is the kind of person who interrupts a conversation to go on a tangent talking only about herself with no regard or notice of anyone else in the conversation, so long as they listen to her when she speaks. She is the type of person who mid-conversation starts staring at her friend across the room, rudely ignoring, once again, anyone but herself and her own immediate needs. is the kind of person who gets a tax refund and spends it immediately on an impulsive dinner, or receives a credit card and buys a plane ticket to for two days. is the kind of person who badmouths her “best friend” behind her back, while simultaneously complimenting herself. If Gerwig is anything like , I sincerely hope I never meet her.

I voted very high on hating the acting in this film, but that isn’t necessarily accurate. I actually think Gerwig did a fantastic job acting, though I found her character torturous to endure. My biggest problem with this film was the casting. I hate nepotism. I’ve worked for ten years as an actor, building up a resume and reputation, but still get passed up on roles for not being famous enough. is filled with ridiculous Catch 22 scenarios. In order to get into the unions, you must work union jobs, but you can’t get those jobs unless you are in a union. In order to be cast in larger roles, you must be marketable, but that is only possible if you have a recognizable name. This is where it gets easy for anyone related to someone famous, and is instantly marketable for nothing they themselves have accomplished. So if Meryl Streep’s daughter wants to play an emotionless bitch in Frances Ha, there is nothing stopping her. Sting’s daughter wants to play the deadpan best friend, why not?  And throw in the daughter of ballet star Jacques D’Amboise for the dance portion of the film for a completely bullshit casting session. I feel bad for any real actors who read for those roles. They never stood a chance, regardless of how good they were.