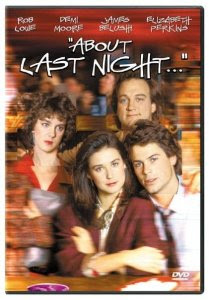 The Brat Pack seems to have finally grown up and stopped all of the self-obsessed whining. Although About Last Night is not about completely wise, mature, or grown up adults, they are at least heading in the right direction. We see them growing through the course of the plot, which surprisingly dead-on in the honest portrayal of adjustments needed for any new relationship. The film even takes into consideration the strain that comes with the relationship from the view of the friends, based on a similarly smart stage play written by David Mamet.

Although Mamet did not write the screenplay for the film (instead adapted by Tim Kazurinsky and Denise DeClue), there remains the biting humor from the play, as well as James Belushi who played the same role in the film as on stage. The film revolves around an impulsive sexual relationship that turns into a committed relationship; and all of the pitfalls and dangers that come with the territory. Danny Martin (Rob Lowe) and Debbie (Demi Moore) meet at a park softball game, and when they see each other at a bar later the same night, they end up sleeping together. After that they only have getting to know each other left, and begin spending inordinate amounts of time together, as is common at the beginning of a relationship.


Each is forced to listen to the criticisms and complaints from their best friends, who are feeling neglected at the sudden inclusion of a significant partner. When people couple up, the friends are left solo. Joan (Elizabeth Perkins) finds many reasons why Danny isn’t good enough for Debbie, none more important than her own neediness. Bernie (Belushi) simply wants his friend to be around more, and that becomes a problem with the amount of time that Debbie takes up, but even more important is the hatred that Joan and Bernie immediately have for each other.

The feature film directorial debut of Edward Zwick was more than promising; About Last Night was an honest romantic comedy which never chose sides between one sex or the other in the portrayal of the rough journey. Even today the film doesn’t seem dated, as long as you can ignore the clothes.