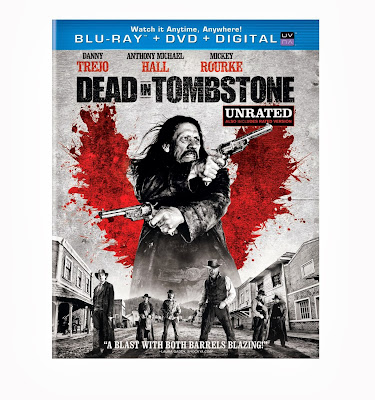 Danny Trejo is a one-note-wonder character actor who has achieved slightly greater fame through the help of Robert Rodriguez and the Machete franchise, and he has cashed in on opportunities wherever they have arisen. The latest is a visually polished western that is out-of-sync in just about every other way imaginable, including Trejo’s believability with a gun. Trejo may be muscular, but he is no action star. Physicality is not his thing, always appearing slightly awkward or forced, perhaps due to all of the camera trickery done to attempt to make him look taller than he is.

But it isn’t fair to lay the failure of Dead in Tombstone at the feet of Trejo, because the action choreography and editing of the action sequences does absolutely nothing for the performances, much less the logic of the entire film. Characters conveniently stop shooting and stare while our not-so-nimble star makes his big move, in a series of awkward and unconvincing actions scenes comprised of individually flawless shots. It resembles a cheap stunt show you might see at Universal Studios.


As if the action scenes being unconvincing weren’t a large enough problem, this film also has a narrative that combines supernatural elements with the western setting in a way that seems modeled after Jonah Hex. When Guerrero Hernandez (Trejo) is murdered in cold blood by his half-brother (Anthony Michael Hall) and their gang for no apparent reason, Satan himself (played by Mickey Rourke) offers the killer an option for a second chance. In order to save his own soul, he must kill all six of the men from his gang a year after they murdered him. He has 24 hours to accomplish this goal or must return to hell instead.

The Blu-ray combo pack includes a DVD and a digital copy, on top of the high definition disc. Exclusive to the Blu-ray are four featurettes about the making of the film, including several on the stunts and effects of the action scenes. The special features also includes on the DVD are deleted scenes and shots, a making-of featurette and a commentary track.