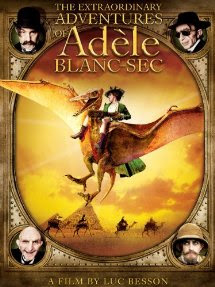 Starring: Louise Bourgoin, Mathieu Amalric
Supporting actors: Gilles Lellouche
Directed by: Luc Besson
Genre: Action, Adventure, Fantasy, Mystery
Runtime: 1 hour 45 minutes
Release year: 2010
Studio: Europacorp
MPAA Rating: Rated PG for some violence, language, brief sensuality and rude humor
The name Luc Besson has always been synonymous with great action, whether as a director, writer or even just producer. Although he has continued to attach his name to solid action movies as producer, the upcoming action comedy, The Family, will be Besson’s first time directing a film in some time. Odder yet are the films which have occupied his time most recently. From 2006’s Arthur and the Invisibles came two additional films in the franchise based on popular children’s books. In 2010 he also made this wonderful French family film, which plays somewhat like a quirky French Indiana Jones.
The Extraordinary Adventures of Adéle Blanc-sec is a fantasy-infused adventure set in the early part of the 20th century with a female author protagonist who is an early feminist icon. Hoping to find a way to save her comatose sister, Adéle (Louise Bourgoin) seeks out the strange Professor Espérandieu (jacky Nercessian) who has found a way to reanimate a dinosaur egg. Hoping that by reanimating the mummified doctor from an Egyptian tomb she will find the answers to saving her sister, Adéle must face numerous obstacles along the way.
The DVD features include a dubbed version of the dialogue, so as to spare younger children the task of reading the speedy French dialogue. The dubbing is good, and appropriately silly at times with the film’s lighthearted fare. There is also the original French tracks for the purists and multilingual. The special features include a making-of featurette, as well as interviews with the cast and a featurette about the music. There are also a few deleted scenes.
Entertainment Value: 8/10
Quality of Filmmaking: 7/10
Historical Significance: 6/10
Disc Features: 7/10