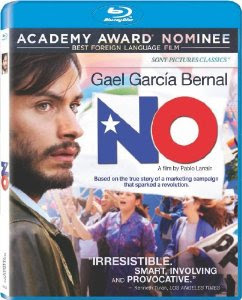 No was the Chilean entry for Best Foreign Film in the 85th Academy Awards, and was also one of the final nominees. This should come as no surprise, considering how much the film has in common with Best Picture winner, Argo. Both are films based on true international political events which American became involved in, primarily through the entertainment industry. No follows the marketing campaign which changed a country in 1988, essentially by treating the campaign advertisements with commercial rather than political sensibilities.

In 1988, was run by military dictator Augusto Pinochet until international pressure forced him to call a plebiscite on his presidency. A vote on whether or not Pinochet will stay in rule for another eight years is set, with the country simply to vote yes or no. While the Yes side has unlimited funds and all of the control, the opposition hires advertising executive René Saavedra (Gael Garcia Bernal) for the No campaign. Each side is given fifteen minutes a day to argue their case, and Saavedra makes the bold choice to entertain and move the audience as if selling a product, avoiding the more shocking footage and political discourse most expected. This approach works, forcing the opposing side to adjust, hiring Saavedra’s business partner (Alfredo Castro) as their advisor.

No is shot in the outdated video support U-matic 3:4, equipment used around the time in the1980s that the film’s events took place. The result is a narrative feature that often appears and feels much more like a documentary. I found myself in a state of confusion when first watching the film’s trailer, because I was so convinced that the footage was old that the presence of Bernal confounded me for more than a moment. Above all else, No is a well-rounded and entertaining film. There is a nice mix of humor, suspense and non-fiction, not unlike Argo.

The Blu-ray release includes a commentary track with Bernal and director Pablo Larrain. There is also Q&A footage with Bernal.