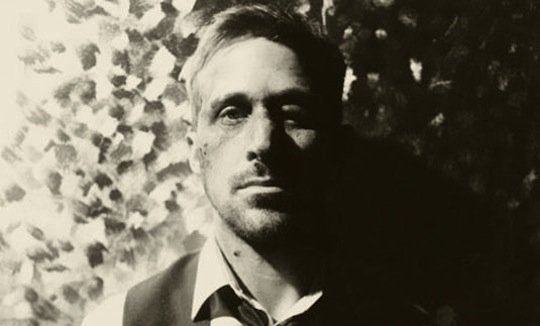 Most mainstream audience members first took notice of Ryan Gosling when he starred in the relentlessly popular adaptation of Nicholas Sparks’ romantic melodrama, The Notebook, but he quickly began taking roles that allowed him to escape the pitfalls of most actors who are able to create a career from being on the cover of teen magazines. Those who have followed him from the beginning of his illustrious career can see how rarely the actor chooses roles with such broad appeal, but when he does they manage to catapult his career into all new opportunities.

2013 looks to be another stellar year for Gosling, including two reunions with directors that he previously produced masterpieces with. A Place Beyond the Pines is now playing in limited theaters (list of theaters: http://bit.ly/172Our4 ), and the trailer for Only God Forgives was just recently released online. Beyond the Pines is directed by Derek Cianfrance (Blue Valentine) and features a performance by Gosling that is so electrifying that it inspired James Franco to write a blog praising the actor (http://www.huffingtonpost.com/james-franco/ryan-gosling-place-beyond-the-pines_b_3014853.html). Only God Forgives is a new collaboration with Danish filmmaker Nicholas Winding Refn (Drive). The red band trailer is below.


For the sake of this list I only considered films from 2012 and earlier, and it should be noted that these are my desert island picks. These are the movies I would (and in some case do) watch countless times. Occasionally emotional attachment and personal preference outweighs quality when making decisions in a desert island list.


The Notebook is one of those films destined to become a classic in the future, remembered by each generation as it is passed along. There is also a great chance that this will happen with Titanic, so I don’t mean to insinuate any statement of worth by claiming this, but I am certain it is true nonetheless. The Notebook was a phenomenon that reached a remarkably wide number of audiences, even if many of the men were there because of their date. I worked at a movie theater when The Notebook was released and I watched the crowds pour in, cleaning up the many wet tissues after the show was over and the sniffing customers had vacated the theater. Even I watched the film twice amongst the mass of couples. Years later I worked at a video store, and once again saw the popularity of the DVD, even years after its initial release. There is a timeless quality about the film and the love story that makes The Notebook accessible to all ages, and doesn’t look likely to grow old. 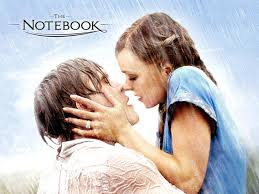 There is more to The Notebook than just the
classic love story to make it such a legendary romance film, although that certainly would seem to be enough. The romance which developed between the two leading stars, Ryan Gosling and Rachel McAdams, certainly helps to reinforce its place in history. Both actors were not nearly as appreciated as their talents seemed to call for before this film, and each elevated the simple love story to something much more. Gosling is among one of the most talented actors in , but like Edward Norton and Russell Crowe before him, sometimes he is so good that he goes unnoticed. Heath Ledger was this type of actor as well, and it is impossible to find a moment that he seems to be acting. Gosling’s performance in this film is a perfect example of how he manages to take even the simplest role and add a bit more to it than is necessary. His dedication is so effective that he often comes off more as a chameleon rather than an actor, who we expect to be able to see ‘acting’. 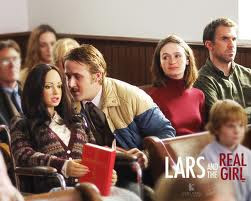 Gosling dons a moustache, a bad haircut and bulky winter clothing for one of the sweetest romantic comedies that he has made. The premise seems outlandish, likely to resort to gags within the first minutes. Gosling stars as a man who is so lonely and cut off from the world that he forces himself into something of a delusional state. Buying a sex doll off of the internet, Lars (Gosling) introduces her to his family as his new girlfriend. Treating her with absolute respect and decency, many are confused about this change in Lars’ behavior, but the arrival of the inanimate partner allows him to face issues which have long been keeping Lars from living his life fully. 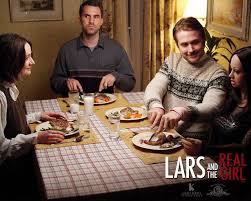 This is one of those films that I have yet to tire of, though I have watched it enough times to know most scenes word for word. Emily Mortimer and Paul Schneider are wonderfully cast as Lars’ sympathetic and supportive family members, with Schneider easily at his best since David Gordon Green’s All the Real Girls. Gosling plays away from the heartthrob personality, even though this was his first return to the genre since The Notebook. His resistance towards being a typical romantic lead reminds me of similar paths Johnny Depp took after escaping “” in favor of John Waters and Tim Burton oddities. 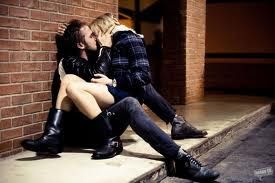 Blue Valentine follows about 24 hours in the life of couple Dean and Cindy (Gosling and Williams), interspersed with footage from their past which provides context for the relationship. Their day begins with the bad news that the family dog has vanished, which is first discovered by their adorable little girl. Although Dean and Cindy don’t seem to be getting along very well any longer, we see through flashbacks that their relationship began very passionately. This makes the inevitability of the future so much bleaker. 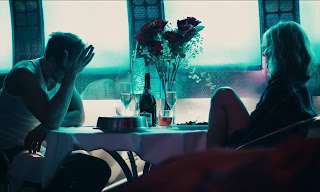 Williams was honored with a Best Actress nomination at the Academy Awards, but Gosling did not get nearly enough attention for this spectacular performance. This is a crowning achievement in a career already full of some of this generation’s most honest performances. Painful as this film may be, few films have captured the rise and fall of love quite so vividly. Gosling may not have received a nomination, but it doesn’t much matter. He will have many more in his future. 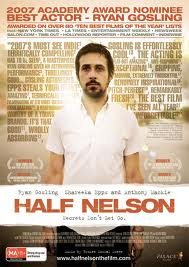 Every so often there is a movie that affects me so profoundly on so many levels that I have difficulty pinpointing specifics coherently and that makes it difficult to find the right words to praise the film properly. Half Nelson is one of these films, in my opinion one of the smartest and effective human stories put on film in years, specifically thanks to the wonderful performances by all and Ryan Fleck’s thoughtful and authentic directing. 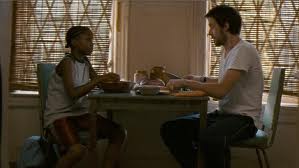 Gosling stars as Dan Dunne, a young impassioned history teacher with the ability to make the difficult subject seem relevant and real, while also keeping a serious drug habit after hours. Dunne sees an ex-girlfriend and finds out that she is engaged and this continues his drug abuse until he begins to spiral out of control, no longer able to function properly. Half Nelson occurs in a real world where even the best teachers have students who don’t listen. It isn’t Dead Poet’s Society and it seems like only a few actually appreciate what a great teacher he is. One that does notice, and becomes even more interested after discovering her teacher’s secret addiction, is Drey (Shareeka Epps). Drey is also on the failing basketball team that Dunne coaches and she forms a bond with him when he starts giving her rides home after practice. As Dunne grows more concerned he learns of Drey’s connection to a local drug dealer (Anthony Mackie), and tries to keep her from becoming involved with him. 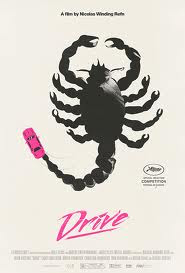 On average, I watch about 600 movies a year. Sometimes it’s more and sometimes it is less, but I will only watch a small percentage of them more than once. The truth is, very few of the 600 are altogether memorable. Some are praiseworthy but I feel no emotional connection to them, while others are indulgent but less than adequate upon later examination. Then there are the perfect films. The ones which not only have the ability to keep you thinking for days, but also grab you in a way which almost feels personal. In 2011, for me, this film was Drive. A culmination of a director I have long respected, an actor I very much admire, and a promising premise taken from a book by James Sallis resulted in the best film of the year. 1 in 600. 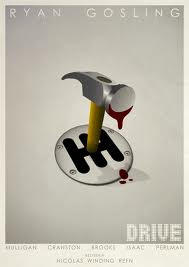 The storyline is rather simple, and the filmmaking simplifies it even further. We are not given lengthy scenes of dialogue to fill us in on back-story, and occasionally we even leave the scene before the dialogue has even begun. In one amazing sequence the driver is walking through a grocery store when he notices his neighbor, Irene (Mulligan). At this point it is clear from his facial expression when he sees her that he wants nothing to do with her. Perhaps he wants no attachments or maybe he has another reason, but instead of approaching the woman and her son, he retreats down another aisle. As fate would have it, he walks out of the store just as Irene discovers that her car won’t start. As well as being a stunt driver and a getaway driver, our antihero protagonist also works with a mechanic (Bryan Cranston), and again we see the look on his face, hesitating before approaching to help. The film then cuts to a shot of them in their apartment elevator. We don’t need the unnecessary dialogue. We know everything we need to know from the images, and with the help of a pop-electronic soundtrack. 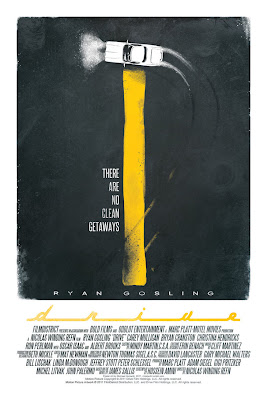 Gosling’s performance comes as no surprise, however, as he has never been short of excellent. What truly surprised me was to see how much director Nicholas Wining Refn has come into his own. He was born and bred amidst the Dogma ’95 movement of Danish cinema, but while he debut feature was certainly shot in natural surroundings with mostly non-actors with natural light, Refn’s Pusher was also a stylistic and graphic gangster film resembling the type of films Quentin Tarantino was making in the 1990s. Followed by two sequels which were each better than the last, Refn showed promise from the very beginning. His films have otherwise always proven to be worth watching, though some are more impressive than others. Each attempts to intellectually approach the art of filmmaking while telling otherwise straightforward stories. He is one of many filmmakers, including Tarantino, who have elevated the genre film into an incredible art form. Drive is Refn’s masterpiece.