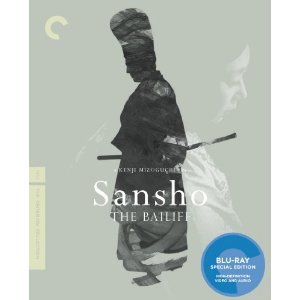 Sansho the Bailiff is a remarkable period drama adapted by the “Sansho the Steward” stories by Ogai Mori. Directed by Kenji Mizoguchi in post-WWII , Sansho the Bailiff is a thoughtful and well-paced drama. This is the work of a seasoned filmmaker, the 81st film of an illustrious cinematic career. Other Japanese directors were more established internationally than Mizoguchi, but this should not detract from his monumental importance nationally. Sansho the Bailiff is a perfect example, a lesser known film from a director worth studying.

The film follows the trials and tribulations of a governor’s family after he makes the mistake of disobeying the reigning feudal lord by acting on his own conscience. Before he is cast into exile, he speaks a few profound words of wisdom to his son. Among other things, he says, “Without mercy, man is like a beast,” leaving us with the religious and moral subtext for the remainder of the film. When his wife and children attempt to find the exiled governor, they are instead captured and sold into slavery. The slave traders separate the mother from her children, who spend the remainder of the film trying to find a way back together.

The brutality of the film comes with the fact that each act the family members take to reunite simple wrenches them further apart, until fewer and fewer remain for the reunion. The Buddhist ideology is easily found in the way the family members selflessly think of others before themselves. The father sacrifices for the family, the mother for the children and the sister for the brother. It is a never-ending cycle of giving, though the bitter-sweet element of their nature comes with the nature of the world surrounding them. Though they are selfless and good, this is often not nearly enough to overcome the despicable nature of those around them, specifically Sansho the Bailiff, who has no hesitation in brutally punishing slaves so that they behave.

The Blu-ray release of this complex classic has a presentation in high definition, through new digital restoration. There is also an optional audio commentary track featuring Japanese-literature scholar Jeffrey Angles and interviews with select crew members. The highlight of the package, however, may not be on the disc. The booklet insert has an essay by scholar Mark Le Fanu, paired with two versions of the story which the film is based on.