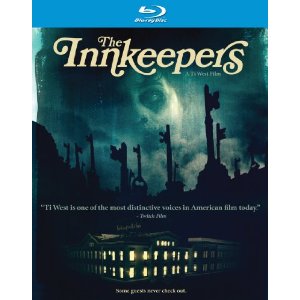 Ti West may not have any large studio budget projects under his belt, but he is becoming an increasingly interesting filmmaker to watch in the horror field. His 1970s drive-in spirited House of the Devil, moving on to direct the sequel to Eli Roth’s Cabin Fever. The Innkeepers is a different kind of horror film, quietly and carefully established. Everything from the storyline to the camera work seems much more deliberate this time around, and it provides plenty of thrills along the way. There is not the mass amount of blood and gore that filled Cabin Fever 2: Spring Fever. All of the frights come from solid filmmaking and classic techniques.
It is the simplicity of The Innkeepers which allows for the scares to work. The less we see, the more our imagination is allowed to wander. Alone in an empty house is a frightening enough idea for many, without the addition of ghosts and haunted halls. All of The Innkeepers takes place at The Yankee Pedlar Inn in during its closing weekend. There are only a handful of guests and two employees, Claire and Luke (Sara Paxton and Pat Healy) during the final weekend open. Claire and Luke take it upon themselves to record the ghosts on tape for fame and fortune. And because they have nothing better to do with the final days of their minimum wage jobs.
Much of The Innkeepers feels more like an independent comedy than it does a horror film, except that the camera work and music continually remind us that we are in a suspense-filled world of unexpected realities. There are many of the expected scares, from recorded voices and pianos playing themselves. There are frights and scares and a surprising twist, but the manner in which West plays all of these cliché moments out is wholly original.
The Blu-ray includes a commentary track with writer/director/editor West, along with producers Peter Phok and Larry Fessenden, and 2nd unit director/sound designer Graham Reznick. A second commentary track has West along with stars Paxton and Healy. A behind the scenes featurette is also included, as well as a trailer, but the high definition presentation of this film alone is nothing to scoff at.