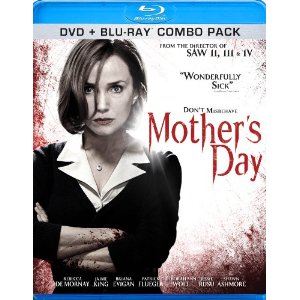 If ever there was a holiday in need of a horror film, it certainly isn’t Mother’s Day. I’m sure that there are some mothers out there who enjoy a bloody action film from a horror director more than they would flowers or gifts, but I have yet to meet them. Most tend to shy away from these type of films, so I guess this is a movie for all of those gore hounds who need something shocking after doing all of the proper sonly duties of the holiday. Mother’s Day is not really about the holiday anyway, and the release of the Blu-ray prior to the holiday is just a marketing ploy. With a film which has been shelved since 2009, they are attempting to give it as much relevance as possible.
Director Darren Lynn Bousman is best known for his work in the Saw franchise, including the first three sequels. He is mostly known for his work as a horror film director, which is probably why this film feels more like horror than action or suspense. There is a sadistic and unpredictable nature to the film’s villains, as well as the slow increase in body count as the innocent victims slowly diminish. Even the way that the story unfolds is filled with the uncertainty and chaos of a horror film. The fact that it is based on a Troma film only solidifies the horrific in the film’s basic structure.
After an unseen bank robbery has gone wrong, three brothers return to their mother’s house to find that she is no longer there. Instead there are new owners and a house full of party guests. These innocent people are immediately taken hostage and used as playthings until they are able to save their injured brother. The arrival of their mother (Rebecca De Mornay) only aggravates the situation even further.
There is a brutal edge to the film, making it feel like a mild version of Funny Games. Some of the film may be unoriginal, but there are still elements of suspense and horror which make it a film worth seeing for die-hard fans of the genre. The Blu-ray includes an audio commentary with director Darren Lynn Bousman and actor Shawn Ashmore. The high definition is also worthwhile, as the photography is mostly solid.