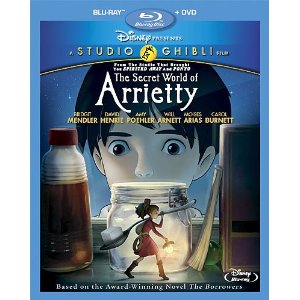 The last film to come from Studio Ghibli to the states was an adaptation of Hans Christian Anderson’s The Little Mermaid in the form of Ponyo. Now comes another adaptation which has already been handled in American cinema, though is seeing an animated life in The Secret World of Arrietty. Based on the Mary Norton’s beloved young adult book, “The Borrowers,” The Secret World of Arrietty blends the childhood story of wonder and magic with the beloved hand-drawn animation of Studio Ghibli.
Arrietty is a young girl standing only a few inches tall. She lives with her family beneath the floorboards of a house that is occupied by unsuspecting humans. They are called Borrowers for their tendency to borrow things which will go unnoticed if missing, using these items to survive in their hidden home. Believing that they may be the last of the kind only makes their survival all the more imminent.
When a sick young boy named Shawn enters the house, the Borrowers are forced to find a way to remain a secret. Shawn’s ability to believe in them is what allows him the patience to wait until they come at night. Once he has seen them, there is no reason for him not to believe. This proves to be dangerous for the Borrowers, although it does not stop Arrietty from starting a forbidden friendship with the sickly young human boy.
For the American version, there have been recorded new voices which include the Disney Channel’s Bridgit Mendler and David Henrie along with Will Arnett, Amy Poehler and Carol Burnett. It is a simple and sweet story, but one with plenty of humor for the comedic giants to sink their teeth into as well. The Blu-ray also comes with a DVD version of the film.
The DVD special features include a music video with Bridgit Mendler and a making of featurette for the music video. These are both included on the Blu-ray disc, along with original Japanese storyboards and trailer galleries, as well as an additional music video of the film’s theme song.