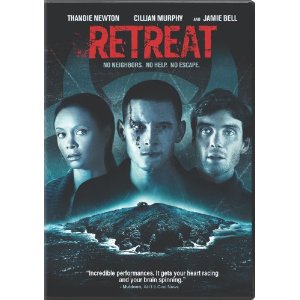 There has been no shortage of post-apocalyptic thrillers and horror films in recent history. Films about the end of the world range from the unrealistic zombie films to those which deal with real-world fears such as disease or the depletion of natural resources. What all of these films seem to have in common is a focus on the actual events that lead to such a disastrous end. What makes Retreat such a compelling film is the fact that we don’t know until the end of the film if the disaster is real, or simply a deranged delusion of one mentally unstable character.
When couple Martin (Cilian Murphy) and Kate (Thandie Newton) decide to take a vacation on an otherwise uninhabited island, they set themselves up for a harrowing sense of exclusion from the outside world. With only a CB radio to get in touch with the outside world, and not even a boat to escape the island themselves, Martin and Kate find themselves in a dilemma when a stranger (Jamie Bell) arrives with horror stories about an apocalyptic virus destroying the world. Claiming to be military, the stranger takes control once he is on the island. He insists that Martin and Kate stay inside so they won’t become infected, though the young couple has suspicions that the entire story may be a ruse.
With only three main characters and a few brief supporting players, Retreat is a heavily reliant on the suspense of the unknown. Whether or not the stranger is telling the truth keeps the film interesting, but the fear is real regardless of the truth in the apocalyptic story. Either they are dealing with the end of the world or a crazed man who has them alone on an island. There is no silver lining to this situation no matter how you look at it. At a certain point this premise starts to wear a little thin, even at 90 minutes, though each actor does a fantastic job. is especially unnerving.
The special features on the DVD include a making-of featurette, as well as a photo gallery.
Starring: Cillian Murphy, Jamie Bell, Thandie Newton, Jimmy Yuill, Marilyn Mantle
Director: Carl Tibbetts
Writers: Carl Tibbetts, Janice Hallett
Producers: Chris Ouwinga, Darryn Welch, David Frost, Dominic Wright, Gary Sinyor
Rated: R (Restricted)
Studio: Sony Pictures Home Entertainment
Release Date: February 21, 2012
Run Time: 90 minutes