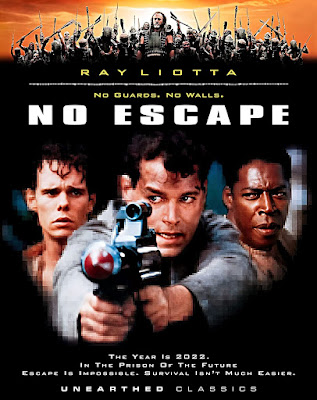 Perhaps it’s a sense of nostalgia, or fatigue over the CGI-laden blockbusters being released today, but No Escape is a perfect example of the underappreciated action films of the 1980s and ‘90s. It may not be a masterpiece, but it is a fun and predictable bit of entertainment with committed actors and practical effects. I would take this over a majority of the blockbusters released in recent years.

Set in 2022, this sci-fi action film follows former Marine Captain John Robbins (Ray Liotta), who is sent to a secret prison island after earning a reputation for escaping from more traditional prisons. Once he arrives on the island, Robbins discovers two factions of convicts. The Outsiders are the larger group, made up of anarchic and violent men who are led by Marek (Stuart Wilson). Marek offers Robbins a place amongst them, but he refuses and is forced to run for his life.

The second group of convicts on the island are The Insider, who are led by a man referring to himself as Father (Lance Henriksen). Along with the obvious biblical implications associated with this name, Father is a benevolent leader who has formed a small community protected from The Outsiders. Robbins has no interest in being a part of The Insiders, until he learns they may be his best chance for escaping the island.

No Escape isn’t a masterpiece. It knows what it is and commits fully to the escapist entertainment. This underrated film from the 1990s is being released on Blu-ray as a part of the Unearthed Classics collection. The Blu-ray special features include the following: