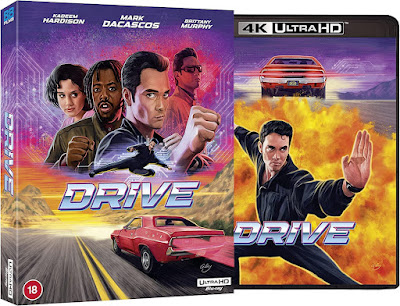 Enjoyment of Drive will dependent entirely on the viewer’s appreciation of good fight choreography and tolerance for a derivative narrative. Released straight-to-video in the late 1990s, Drive wasn’t trying to reinvent the buddy action comedy as much as it was capitalizing on the success of the sub-genre. At the same time, the fight scenes in the film are often better than a majority of the theatrically released films from the decade, and certainly more impressive than the CGI-laden action dominating movies today. It may not be a masterpiece, but Drive is hidden gem sure to be appreciated by fans of action.

Mixing in an element of science-fiction, Drive follows Hong Kong special agent Toby Wong (Mark Dacascos) after he is equipped with an advanced bio-device giving him superhuman speed, strength, and agility. Trying to keep the technology out of Chinese control, Wong travels to Los Angeles with plans of selling the technology for $5 million. He is pursued by assassin Vic Madison (John Pyper-Ferguson) and a team of mercenaries, who attempt to capture him before the sale is complete. Wong’s only ally is an unemployed songwriter named Malik Brody (Kadeem Hardison), who he first uses as a hostage and getaway driver to escape an attack.

As Brody helps Wong get to the meet-up location for the sale, the film turns into a road trip buddy action film. With all of the various genres combined, Drive is surprisingly simplistic. There are series of chase and fight scenes, mixed with banter between the two very different dual protagonists. Often everything but the action feels like filler, but even subpar acting and one-liners are bearable when the action starts up again. Thankfully, it is never long between action sequences, choreographed brilliantly by Koichi Sakamoto.

The 4K release of Drive includes an Ultra High Definition presentation of the extended director’s cut of the film from a brand new 4K scan of the original camera negative. It is presented in Dolby Vision with Dolby Atmos. The original cut is also available with an alternate musical score. Special features include a commentary track with director Steve Wang, who is joined by Sakamoto, Dacascos, and Hardison. There is also a making-of documentary, six additional deleted scenes, and interviews with key cast and crew members. The package comes with new artwork by Sam Gilbey, though the reversible sleeve also contains the original poster art. The mini poster of the new artwork is also included in the package.