To Sleep So as to Dream Blu-ray Review 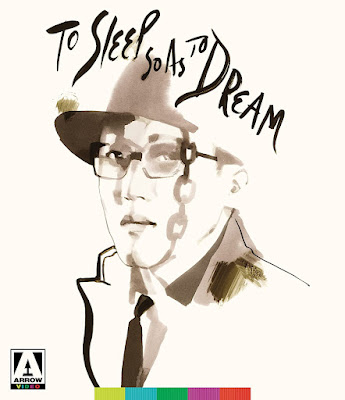 As a film critic, or even just someone who watches far too many movies, I find that I am rarely ever surprised anymore. To Sleep So as to Dream is the exception. This is the kind of film that can keep even the most avid film viewer on their toes. At the same time, it is a film made for film fans, specifically those familiar with the history of Japanese cinema.

To Sleep So as to Dream embraces the style of silent Japanese cinema, in a narrative that seems to be set in the 1930s, despite the timeline suggesting it is actually the 1960s. This is all in a movie made in the early 1980s. If this sounds like a puzzle, that seems to be intentional given it is director Kaizo Hayashi’s take on a detective narrative. In some ways the film is tongue-in-cheek, containing a hard-boiled detective protagonist who constantly eats hardboiled eggs, with a mystery that literally dives into the dreamlike world of silent cinema while telling the story almost entirely without traditional dialogue. At the same time, there is a loving nostalgia in the film’s references and casting choices.

When private eye Uotsuka (Shiro Sano) and his skilled sidekick Kobayashi (Koji Otake) are hired by an aging former actress (Fujiko Fukamizu) to find her missing daughter, they discover the assignment is far more complicated than expected. Kidnappers have ransom demands, but don’t comply even when they are met. Uotsuka and Kobayashi find themselves pulled deeper into the mystery, which literally pulls them into the world of movies. When the mystery is finally revealed, it is unexpected and rewarding in ways that shouldn’t be spoiled.

To Sleep So as to Dream is an entertaining exercise in film form even for those unaware of the specifics of Japanese cinema but has additional layers for those who are. Not only does the film contain stars from classic Japanese films, it also employs the tradition of the benshi, live narrators used during silent cinema in Japan. The main reason silent cinema lasted longer in Japan was to retain the job for working benshi, and Hayashi’s film pays homage to this tradition.

·  How Many Eggs? Actor Shiro Sano Talks, a brand new interview with the film’s lead actor

·  Midori Sawato Performs ‘The Eternal Mystery’, an exclusive benshi performance to the film within the film

·  The Restoration of To Sleep So as to Dream featurette

·  Fragments from Japan’s Lost Silent Heyday, a selection of scenes from silent jidai-geki films from the Kyoto Toy Museum archives