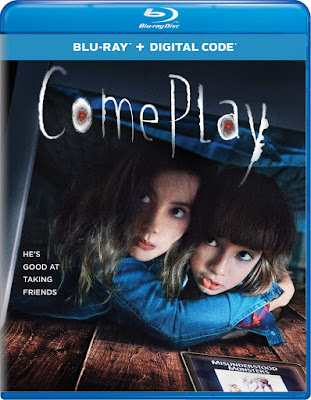 Prior to the pandemic, there were a few rising trends in the themes of American horror films. Along with the rise in occult and witchcraft narratives, we saw an increased anxiety over society’s dependence on technology and social media. Some of these films involve the supernatural, as seems to be the case in the Unfriended franchise, or an addition to the previously mentioned witchcraft subgenre, like Friend Request. Even the supernatural serial killer doll Chucky was reinvented as a smart device with disabled safety features. The terror comes from social media, apps (Countdown), or in the case of Come Play, the devices themselves.

The basic premise of Come Play feels like a studio attempt to imitate the magic of independent horror darling, The Babadook, with technological updates and a horror villain that is more creature than supernatural presence. Because a young autistic boy named Oliver (Azhy Robertson) struggles to make friends, he relies on screens for any social interaction he does have. And that is also where he is approached by Larry, a creature from another world that is able to use technology to cross over and make friends. Thankfully this is not one of those horror narratives where nobody but the protagonist is aware of the monster’s existence, and Oliver’s mother (Gillian Jacobs) becomes his greatest defender fairly early in the film. His father (John Gallagher Jr.) is less accepting of this disturbing reality, though this is primarily to provide conflict in an already dissolving marriage.

While the creature of Larry is designed to maximize the creepiness of many sequences, he feels like something that belongs in A Quiet Place rather than a supernatural horror film. It doesn’t quite mesh with the other elements of the films, ultimately making Come Play feel somewhat disjointed, despite the creepiness of individual sequences. The larger issue, however, may be the shift that has occurred in society since the pandemic. We may have had concerns about society’s dependency on technology to the neglect of human interaction, but now I think we are all just glad to have any form of interaction. Simply put, the fears represented in this film had different relevance in 2017, when the short film it is based on was made.

The Blu-ray release of Come Play also comes with a digital copy. There aren’t any special features on the disc itself.

Email ThisBlogThis!Share to TwitterShare to FacebookShare to Pinterest
tags horror