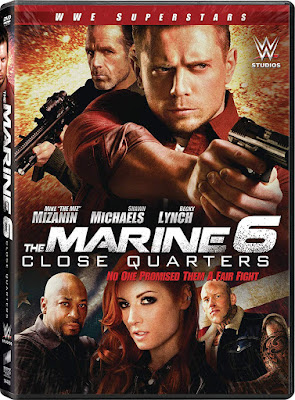 This time Jake just coincidentally walks in on a gang of international criminals holding a girl hostage in a remote abandoned building. This contrived set-up allows for the usual narrative structure for the franchise, with a marine outnumbered in a isolated location against a bunch of bad actors with inconsistent accents. In slight contrast to previous installments, Jake is given back-up in the form of Luke Trapper (Shawn Michaels), who also provides some of the film’s comedic relief in the form of poorly-written banter. The two of them are visiting a homeless veteran when they stumble on a kidnapping plot being used to blackmail a juror in a high profile trial.

Jake and Luke are able to rescue the kidnapped girl (Louisa Connolly-Burnham) without too much trouble, but the gang of criminals lock down the building and block all exits. Like the parking garage from one of the previous installments, or the building in Die Hard (which is clearly the model many action films have since utilized), they are trapped and forced to fight their way out of the building by taking the bad guys out one at a time. This basically just provides an excuse for plenty of hand-to-hand fight scenes, so that the WWE cast members can use their only real skills in order to try and make the audience forget about the dialogue scenes.

Among the worst of the wrestlers-turned-actors is villain Maddy Hayes (a.k.a. Becky Lynch), whose Irish accent is painfully inconsistent from one scene to the next, despite actually being Irish. The worst of the acting comes when the film attempts to fabricate an emotional response with poorly written drama. These films work best when audiences aren’t asked to take them seriously. This one goes so far as to end with a tribute montage for a fictional character.

The DVD release includes two making-of featurettes, as well as including a digital copy of the film. The two extras on the disc are fairly generic promo featurettes about the cast and the fight choreography.