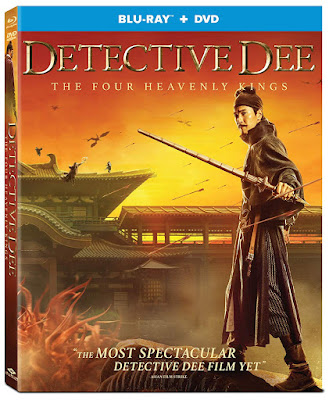 Even before the first Detective Dee film was released, there were plans to make a sequel. Without Andy Lau returning as the aged Detective Dee, the sequel became a prequel and was titled Young Detective Dee with Mark Chao standing in as the iconic character. Detective Dee: The Four Heavenly Kings is a direct sequel to that prequel, still starring Chao and taking place immediately following the last film. But despite the returning characters and continuation of the timeline, the latest installment allows the mystery narrative to be replaced by an increase in fight sequences and special effects.

After the success found in the mystery of the prequel, Detective Dee has been made the head of the Bureau of Investigation in Tang Dynasty China, as well as being given the responsibility to care for the Dragon Taming Mace, a weapon with such immense powers that many unsavory characters begin a ploy to possess it by any means necessary. Part of the reason that the mace is desired is to prove Dee’s inadequacy at the head of the Bureau so that the Empress (Carina Lau) can have complete control for herself. Dee must navigate through conspiracies to frame him and other plots to take him out, often increasing the screen time for everyone but the title character.

The empress instructs one of the members of the royal guard (Feng Shaofeng) to steal the mace from Dee in order to prove his inadequacies, but is unaware that there are clans of wizards attempting to steal the mace for their own motives to tear down the Tang Dynasty. This is primarily done by creating illusions to disorient members of the guard and the Bureau alike. The wizards force visions of creatures and monsters into the mind of their enemies, but it primarily feels like an excuse to cram as many special effects into the film as possible. Released in Imax and in 3D, visual spectacle clearly takes focus over narrative or logic. In theaters this may have been an easier shortcoming to forgive, but the decrease in an intelligent mystery or emphasis on character development leave this sequel feeling flat on a small screen.

The Blu-ray release of Detective Dee: The Four Heavenly Kings comes with a DVD copy of the film, but there are no real special features on either of the discs. The only extras are a few trailers for other Well Go USA releases. The visuals look great on Blu-ray, even without the 3D that clearly enhanced the film in theaters.