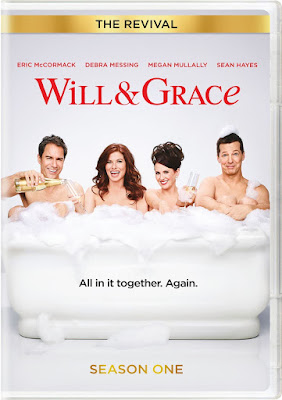 But even as I make this minor criticism of the “Will & Grace” revival, I am well aware that most people did not watch this sitcom for the character development as much as the jokes. And the jokes have returned with even more biting social commentary than when the series first aired.  If the original series was groundbreaking simply by being a sitcom with openly gay characters, the revival must work twice as hard to be half as relevant, as gay characters on TV have now become commonplace. Some complained that the new season has increased the political humor, but the same could be said of nearly all comedy in the last few years. With the topics of the show and the criticism of the current administration, it would be far stranger if there wasn’t any political discussion in a series like this.

As though a decade hadn’t passed, the show’s four main characters are in very similar places as they were before (ignoring the series finale). Grace (Debra Messing) and Will (Eric McCormack) are somehow still living together and are as co-dependent as ever. They even make the decision to work together, giving them more reason for scenes together, as if the show needed that. Also back are the wisecracking sidekicks, Jack (Sean Hayes) and Karen (Megan Mullally), who elevate sillier elements of the show with their ability to embrace the goofiness. Of course, it would be impossible to do the show without these stars, but the revival goes one step further by bringing back the show’s original director, James Burrows.

The first season of the revival had sixteen episodes, all of which are included in this two-disc set. There are also a handful of special features, including several promotional featurettes that have behind-the-scenes footage and interviews with the cast and crew. But the most enjoyable of the extras is likely to be the gag reel.