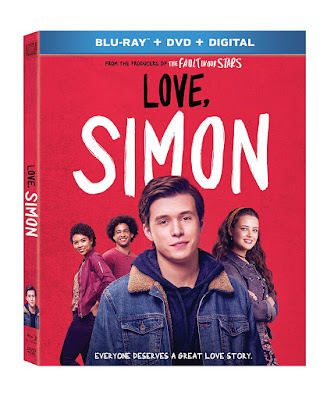 There have been plenty of coming-of-age narratives over the years, and new ones are always being made for the next generation. There has also been an increase in LGTB narratives over the years, and far more mainstream releases recently, although these coming-of-age narratives often tend to focus on sex rather than romance. What makes Love, Simon unique, despite its familiarity to many other films, is the sweet sentimentality that the narrative allows its protagonist. Simon’s love story is an actual love story, not one that grows out of lust and hormones.

The dilemma for title character, Simon Spier (Nick Robinson), is a fairly simple one; he knows that he is gay, but hasn’t figured out how to tell the people in his life. At seventeen-years-old, Simon’s high school experience is mostly average. He has a group of close friends and does all of the normal teenage activities. Although there is a healthy dose of teenage angst and rebellion, Simon is a surprisingly well adjusted teenager, except for this one secret that he has kept from his friends and family.

Simon’s friendships are typical of high school, including the usual drama that comes with growing up. This includes unrequited feelings and mistakes made out of selfishness. Simon becomes enamored with one of his classmates who has anonymously come out to his entire school online. Emboldened by this classmate’s bravery, Simon begins to exchange emails, while also coming to terms with his own sexuality. The complications come with the relationships and feelings of the people around Simon, especially when he starts using them for his own gain. Then there is a small element of mystery to the film, because the identity of Simon’s new pen pal remains anonymous, even as Simon decides to stop hiding.

While a majority of the film focuses on the friendships and relationships that Simon builds in high school (with a number of cast members from the TV show “13 Reasons Why,” including Katherine Langford), there is also a large chunk of the movie dedicated to Simon’s home life. Along with a loving sister, Simon is blessed to have an amazing pair of parents. Josh Duhamel and Jennifer Garner are so perfectly cast as these parents, capturing the warmth without losing the humor. This is the miracle of Love, Simon; it has the ability to make you laugh in-between the tears .

The Blu-ray release for Love, Simon comes with a DVD and a Digital copy of the movie, along with the extras on the disc. There are a handful of deleted scenes, several promotional featurettes, a contest winning short film, and a commentary track. The most impressive of the featurettes is one that covers the adaptation process, translating the story from the novel to screen. The contest-winning short film was from a contest about first love stories, which was also a promotional tactic for the film’s release. And the commentary track includes director Greg Berlanti, producer Isaac Klausner, and co-screenwriter Isaac Aptaker. The final extra is a production photo gallery.