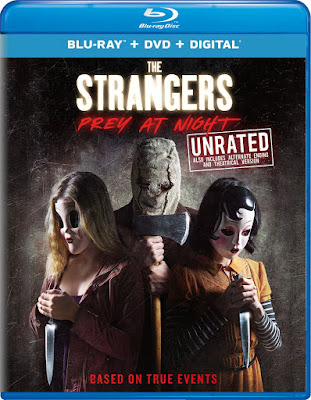 While the original film took place at a remote vacation cabin with a couple going through emotional difficulties in their relationship, this one takes place in an off-season mobile home park. When Mike (Martin Henderson) and Cindy (Christina Hendricks) are forced to move with their two kids (Bailee Madison and Lewis Pullman), they make a stop at the mobile home park, unaware that they will spend their first night struggling to survive the attacks of three masked killers.  The family is even given emotional problems to deal with, though we know from the past film that these issues will be irrelevant once the attacks begin. The logic of a mobile home park that is completely deserted is questionable, but the filmmakers attempt to explain it away with a few gruesome murders at the beginning of the film. This also makes it seem like the attackers are laying in wait in this installment, decreasing the randomness of the original.

Having never exposed the identity of the mask-wearing psychopaths in the first film, Prey at Night is able to easily bring them back without any explanation needed. Part of what made them so terrifying in the first film was also the randomness and unexplained reasons for the home invasion attacks. We are meant to believe that it was simply bad luck that the killers chose our protagonist’s home. While the sequel still has some of the inexplicable elements, it also increases the intelligence of the victims and decreases the abilities of the attackers. This makes for a less terrifying experience, even if including the catharsis that comes from allowing the victims to fight back.

Not only are there more victims for the killers in this sequel, but in allowing the victims to fight back against their attackers, there are additional excuses for violence and gore in the film. It wasn’t that the first film didn’t have graphic content, but it was selective in its use. The horror was far more psychological in the original, which is an element that director Johannes Roberts sacrifices for cheap thrills in this second installment. While The Strangers was a rare horror film that was able to show restraint, the sequel resembles all of the slashers I was originally impressed that The Strangers was so different from.

The Blu-ray release of The Strangers: Prey at Night comes with a DVD and a Digital copy of the film, on top of the extras included on the disc. Those include a handful of special features, half of which are focused on the music used for the film’s soundtrack, giving the movie a slightly retro feel to it, despite appearing to take place in modern times. There is a music video included, as well as a featurette about the musical choices. The other two featurettes include fairly generic promotional content, from behind-the scenes footage to cast/crew interviews.