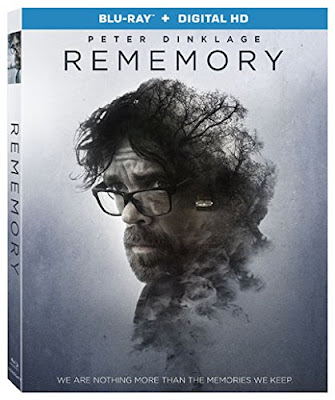 The film follows a man named Sam Bloom (Peter Dinklage) in the investigation of the mysterious death of a scientist named Gordon Dunn (Martin Donovan), though his connection to the deceased is kept a mystery until the end of the film. All we know is that Sam is somewhat obsessed with the scientist, who also happens to be the creator of a device that allows the subject to record their memories for playback. This not only allows others to see your memories, but also makes the recollection of lost moments possible. We discover through a flashback sequence that Sam lost his rock star brother (Matt Ellis) in a tragic car accident, but is unable to remember the last words his sibling spoke to him, explaining at least part of his preoccupation with Dunn and his invention.

When the prolific inventor suddenly ends up mysteriously dead, Sam feels a compulsion to investigate. He visits Dunn’s widow (Julia Ormond) under a fake name, using access to her house as a way to steal the machine and discs containing memories of its subjects. Believing that the machine has something to do with Dunn’s death, Sam estimates that he can find answer if he watches the memories of those closest to him. He follows this up by visiting each of them, discovering that there are problems with the machine that were kept secret. These problems begin to affect Sam as he uses the machine to try and remember what his brother’s final words to him were.

As Sam visits each of the subjects of the machine, he discovers that many of them had reason to be angry with Dunn, both for personal and professional reasons. While one of his test subjects was having an affair with him, others were angered by the side effects caused by the machine. The late Anton Yelchin has a small but impactful supporting role as one of these subjects, Todd, who is suffering from the after-effects of the process. As Sam begins to use the machine in an effort to find answers, he also finds himself subject to the same side effects, including suffering from hallucinations of his deceased brother.

As a mystery film, the final revelation is a bit underwhelming. As science fiction, it is too low key to appease many of the deeper genre fans, never going into much detail about the science behind the invention or the morality of using it. In the end, it is the dramatic elements of the story that repeatedly take precedence, and the strength in this decision comes from the cast’s ability to elevate material that never really rises above mediocre.

The Blu-ray release of this somber sci-fi mystery comes with a Digital HD copy of the movie, along with a couple of special features on the disc. The highlight of the extras is a commentary track with writer/director Mark Palansky (Penelope) and star Peter Dinklage. There is also a thirty-minute promotional featurette, including interviews with cast and crew about the themes of the film.