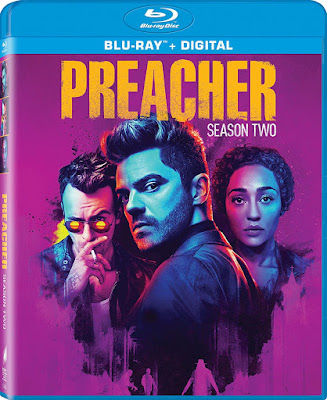 In the first season of “Preacher,” criminal turned small-town preacher, Jesse Custer (Dominic Cooper), is miraculously given the gift of power from God. This power allows him to control anyone with the power of suggestion, though there are many in heaven and earth that are eager to get their hands on this ability. After coming to terms with this gift over the course of the first season, there finally seems to be some purpose to the second season as Custer sets out to find God with the help of his gangster girlfriend, Tulip (Ruth Negga), and his vampire best friend, Cassidy (Joseph Gilgun).

Apparently God has gone missing and nobody knows where he is, putting all of heaven in chaos. This eventually becomes the focus of the second half of the season, which quickly loses steam after an exciting beginning involving a hired assassin sent to kill Custer because of the gift he possesses. Unfortunately, about halfway through the season there is a resolution to this storyline and the series begins to lack focus in the same way that made season one slightly forgettable. There are more great moments in season two than there were in the first, but the slow moments seem that much more disappointing as a result. Had the season built up to its exciting moments, this would have been less of an issue. But it starts with so much energy and excitement that there is no way to maintain it.

The other thing that drags the season down towards the second half is the relationship drama. Despite being based on a graphic novel, the series is weighed down by the psychological stress of the supernatural situations. As bad-ass as Tulip was in the first season, she changes in season two in a way that is not always fun to watch, even if it is more realistic. Dragging out the love triangle between Cassidy, Custer and Tulip also becomes tiresome, and never reaches a clear resolution. Often the most consistent character and storyline of season two is Eugene (Ian Colletti), who is trying to break out of hell with the help of Adolf Hitler (Noah Taylor) after accidentally being sent there in the first season.

Season two has thirteen episodes, up from the ten of season one. They are included on four Blu-ray discs, along with a couple of extras. There is a brief making-of featurette, as well as a gag reel. The package also comes with a digital copy of the season.