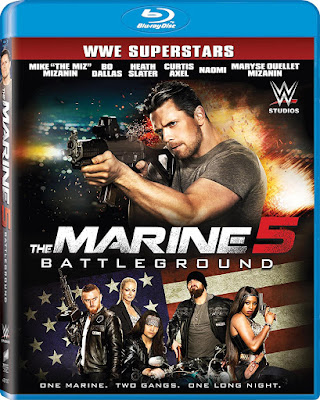 No longer working as a Marine, Jake Carter (Mike “The Miz” Mizanin) is on his first shift as an EMT when he and his partner (Anna Van Hooft) are sent on a distress call to an empty parking structure. Although they think the call is for a heart attack, it turns out to be gunshot wounds on a man (Nathan Mitchell) who has just carried out a hit on a biker gang. Before Jake and his partner have the chance to rescue the suspect, they find themselves trapped in the lower levels of the parking garage by a gang of surprisingly diverse bikers looking for revenge.

This allows WWE Studios to do what they love best, casting numerous wrestlers to play the villains that our hero will dispatch over the course of the film. There is even an appearance by WWE Diva and Mizanin’s wife, Maryse, though she plays a victim on an early call rather than one of the bikers, as the cover art might suggest. Rather than giving them what they want, Jake stands his ground against the bikers and uses his training to fight back. While some of this means clever tricks and sneaking around to counter being outnumbered and outgunned, there is also plenty of hand-to-hand fighting that just gives these wrestlers the opportunity to do onscreen what they are known for onstage.

This familiar action film formula is essentially just Die Hard in a parking garage, but the simplicity of the narrative is an asset compared to some of the more convoluted plots in the franchise. This is also similar to the set-up of the first film, replacing the wilderness with an urban setting. Simplicity doesn’t necessarily make The Marine 5 a good movie, but it is more enjoyable than a majority of the straight-to-video installments. The biggest problem is the lack of logic in the characters’ actions, though this hardly seems the film that fans will spend much time thinking about.

The special features include two featurettes, one of which focuses on the casting of WWE stars. Neither is much more than promotional fodder, though I suppose some fans may appreciate the cast interviews. I don’t particularly care about WWE, so I may not be the target audience for this film, despite my love of all things action.