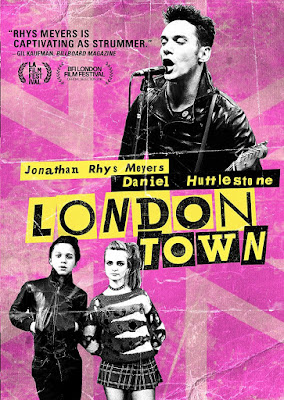 As a typical coming of age film set in the world of rock n’ roll, specifically the 1970s punk scene in England, London Town is like a British Almost Famous, with far less charm and a more predictable narrative. The biggest difference is the inclusion of real rock icons in the fabricated narrative, as opposed to a fictional band based on Cameron Crowe’s real experiences as a young journalist. Even with a character based on a real person, London Town often feels more like fantasy than reality. Specifically, it feels like the dream of a young punk fan who has never grown out of the obsession, imagining that their favorite star might show up to save the day when needed most.

Shay (Daniel Huttlestone) is a fifteen-year-old living in a small town outside of London, facing the usual trappings of teenage years. On top of the typical struggles involving bullies and girls, he is forced to care for his younger sister and help with housework after his mother left them for a carefree life as a groupie in a small punk band in London. Shay resents his father (Dougray Scott) for their humble and hardworking lifestyle, longing for some of the freedom enjoyed by his mother. After his father is injured on the job, Shay is given even more responsibility, taking over the day-to-day responsibilities of running their small piano shop and illegally driving a taxi in the evening.

Even this is not enough to pay the bills, but Shay somehow still manages to find the time to explore a newfound love of punk music with the girl who introduced him to it. On a trip into London for a piano part, Shay encounters Vivian (Nell Williams), who quickly convinces him to join her at a punk concert. Then Shay coincidentally picks up The Clash front man Joe Strummer (Jonathan Rhys Meyers) in his cab one evening, beginning a saccharine friendship with the musician which seems counter to the behavior one might expect from a punk rocker. The Clash then somehow becomes the fairy godmother in Shay’s fantasy narrative, however grounded the commentary on working-class struggles may be.

Not only does the inclusion of punk rock feel somewhat contradictory to the feel-good nature of the narrative, it puts the protagonist in all kinds of unbelievable situations. It isn’t enough for Shay to work two jobs, care for his sister, begin sexual exploration with his first girlfriend, and make friends with a rock icon; he also has to learn how to fight against grown men and police in a number of battles between punk rockers and skinheads outside The Clash shows. In short, London Town tries to do too much with its unbelievable premise, which destroys any of the realism created by strong production design elements. It is clear that the filmmakers are fans of punk music, but the screenplay for London Town feels like a wish-fulfillment fantasy from a follower that has never grown up.

Despite only being in a few scenes of the film, Jonathan Rhys Meyers has top billing on the DVD cover and is the only one to give an interview in the sole special feature. It isn’t that he doesn’t give a respectable gravel-voiced performance, but this is more of a glorified cameo in the film than a leading role. The DVD also includes a trailer.